Warning: Use of undefined constant REQUEST_URI - assumed 'REQUEST_URI' (this will throw an Error in a future version of PHP) in /homepages/5/d699574795/htdocs/radicalsurvivalism-com/web/wp-content/themes/editorialmag/functions.php on line 73
 The Ten Countries Deepest In Debt – Radical Survivalism
Skip to content
Current Events Economics 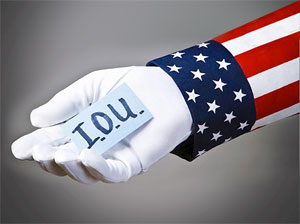 The Greek government on Sunday agreed to drastic austerity measures in the hopes of securing a 130 billion euro bailout from international creditors — the second bailout in two years. The measures include dramatic cuts in pay, pensions and government services.

The creditors, which include the European Commission, the International Monetary Fund and the European Central Bank, demanded that by Wednesday Greece show clear evidence of how it will make 325 million euro of the 3.3 billion euro cuts. Greece, which has among the worst debt in the world, faces default as early as March if it does not get the bailout.

In addition to Greece, several European Union member countries now face overwhelming government debt. On Monday, Moody’s downgraded six countries, including Italy, Portugal and Spain. Other countries, like Germany and Japan, also have burdensome debts, but unlike Greece or other troubled EU members, their debt problems are not unmanageable. 24/7 Wall St. has identified the countries that have the highest debt-to-GDP ratios.

Many of the countries with the highest debt levels relative to their gross domestic products have been hit hardest by the global recession. Greece, Ireland and Portugal all have unemployment rates above 14%. Wealth in these countries is extremely low. In the case of Portugal, GDP per capita in 2010 was just $25,575, lower than every country in the developed world except Slovakia. The combination of extremely high debt, high liabilities and sinking national productivity has resulted in credit downgrades to below investment grade, or junk, bond status. Moody’s rates Ireland “Ba2,” Greece “Ca,” and just downgraded Portugal to “Ba3.”

The increasingly dire situations of several of these nations have forced their governments to enact desperate measures or face financial and economic ruin. Greece is not the only country to recently pass and implement austerity measures. In November 2011, Portugal passed a new austerity budget, which raised taxes on the population and cut the wages of all government employees. In Italy, the retirement age has been raised, and levees on pensioners have gone up as well.

Not all of the countries with extremely high debt relative to their GDPs are doing poorly. Government debt of Germany and Japan is high, but these countries can afford it. Their high debt-to-GDP ratios are balanced by relatively strong economies and wealthy populations. Germany has the highest GDP in Europe and the fourth highest in the world. While Japan’s economy was derailed by the earthquake and resulting nuclear tragedy, it remains the third-largest economy by GDP.

Though countries like Germany, France, UK, the U.S. and Japan continue to have relatively stable economies despite their massive debt, this may not always be the case. Last year, Standard & Poor’s downgraded both France and the U.S. from perfect AAA ratings. Yesterday, Moody’s gave France and the UK negative outlooks.

While many of these economies have started to recover from the recession, they continue to accrue debt. In some cases, even the world’s wealthiest economies have been forced to pass austerity measures of their own. Many U.S. states, for example, have made substantial cuts to government workforces.

24/7 Wall St. ranked developed countries by estimated general government debt as a percentage of nominal GDP for 2011, based on data provided by Moody’s Statistical Handbook for 2011. 24/7 also reviewed nominal GDP, nominal GDP growth, GDP per capita (PPP) and sovereign credit rating from Moody’s. All of the data from the handbook is an estimate for 2011, with the exception of GDP per capita, which is for 2010. Unemployment rates are from the Organization for Economic Co-operation and Development.

These are the 10 countries deepest in debt.

Although the UK has one of the largest debt-to-GDP ratios among developed nations, it has managed to keep its economy relatively stable. The UK is not part of the eurozone and has its own independent central bank. The UK’s independence has helped protect it from being engulfed in the European debt crisis. Government bond yields have remained low. The country also has retained its Aaa credit rating, reflecting its secure financial standing.

As the largest economy and financial stronghold of the EU, Germany has the most interest in maintaining debt stability for itself and the entire eurozone. In 2010, when Greece was on the verge of defaulting on its debt, the IMF and EU were forced to implement a 45 billion euro bailout package. A good portion of the bill was footed by Germany. The country has a perfect credit rating and an unemployment rate of just 5.5%, one of the lowest in Europe. Despite its relatively strong economy, Germany will have one of the largest debt-to-GDP ratios among developed nations of 81.8%, according to Moody’s projections.

France is the third-biggest economy in the EU, with a GDP of $2.76 trillion, just shy of the UK’s $2.46 trillion. In January, after being long-considered one of the more economically stable countries, Standard & Poor’s downgraded French sovereign debt from a perfect AAA to AA+. This came at the same time eight other euro nations, including Spain, Portugal and Italy, were also downgraded. S&P’s action represented a serious blow to the government, which had been claiming its economy as stable as the UK’s. Moody’s still rates the country at Aaa, the highest rating, but changed the country’s outlook to negative on Monday.

Belgium’s public debt-to-GDP ratio peaked in 1993 at about 135%, but was subsequently reduced to about 84% by 2007. In just four years, the ratio has risen to nearly 95%. In December 2011, Moody’s downgraded Belgium’s local and foreign currency government bonds from Aa1 to Aa3. In its explanation of the downgrade, the rating agency cited “the growing risk to economic growth created by the need for tax hikes or spending cuts.” In January of this year, the country was forced to make about $1.3 billion in spending cuts, according to The Financial Times, to avoid failing “to meet new European Union fiscal rules designed to prevent a repeat of the Eurozone debt crisis.”

Portugal suffered greatly from the global recession — more than many other countries — partly because of its low GDP per capita. In 2011, the country received a $104 billion bailout from the EU and the IMF due to its large budget deficit and growing public debt. The Portuguese government now “plans to trim the budget deficit from 9.8 percent of gross domestic product in 2010 to 4.5 percent in 2012 and to the EU ceiling of 3 percent in 2013,” according Business Week. The country’s debt was downgraded to junk status by Moody’s in July 2011 and downgraded again to Ba3 on Monday.

Ireland was once the healthiest economy in the EU. In the early 2000s, it had the lowest unemployment rate of any developed industrial country. During that time, nominal GDP was growing at an average rate of roughly 10% each year. However, when the global economic recession hit, Ireland’s economy began contracting rapidly. In 2006, the Irish government had a budget surplus of 2.9% of GDP. In 2010, it accrued a staggering deficit of 32.4% of GDP. Since 2001, Ireland’s debt has increased more than 500%. Moody’s estimates that the country’s general government debt was $224 billion, well more than its GDP of $216 billion. Moody’s rates Ireland’s sovereign debt at Ba1, or junk status.

Italy’s large public debt is made worse by the country’s poor economic growth. In 2010, GDP grew at a sluggish 1.3%. This was preceded by two years of falling GDP. In December 2011, the Italian government passed an austerity package in order to lower borrowing costs. The Financial Times reports that according to consumer association Federconsumatori, the government’s nearly $40 billion package of tax increases and spending cuts will cost the average household about $1,500 each year for the next three years. On Monday, Moody’s downgraded Italy’s credit rating to A3, from A2.

Greece became the poster child of the European financial crisis in 2009 and 2010. After it was bailed out by the rest of the EU and the IMF, it appeared that matters could not get any worse. Instead, Greece’s economy has continued to unravel, prompting new austerity measures and talks of an even more serious default crisis. In 2010, Greece’s debt as a percent of GDP was 143%. Last year, Moody’s estimates Greece’s debt increased to 163% of GDP. Greece would need a second bailout worth 130 billion euro — the equivalent of roughly $172 billion — in order to prevent the country from defaulting on its debt in March.

Japan’s debt-to-GDP ratio of 233.1% is the highest among the world’s developed nations by a large margin. Despite the country’s massive debt, it has managed to avoid the type of economic distress affecting nations such as Greece and Portugal. This is largely due to Japan’s healthy unemployment rate and population of domestic bondholders, who consistently fund Japanese government borrowing. Japanese Vice Minister Fumihiko Igarashi said in a speech in November 2011 that “95% of Japanese government bonds have been financed domestically so far, with only 5% held by foreigners.” Prime Minister Yoshihiko Noda has proposed the doubling of Japan’s 5% national sales tax by 2015 to help bring down the nation’s debt.