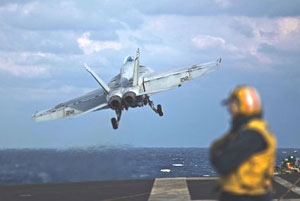 WASHINGTON – Secretary of Defense Leon Panetta believes that Israel could attack Iran in an April-to-June timeframe, and there apparently has been a decision made for the U.S. to help in an assault on the radical Islamic nation’s nuclear facilities.

U.S. military sources tell WND that the Pentagon has begun preparations for “a number of operational plans and counter-operations,” with a Feb. 22 due date for submitting the plans.

There also is a request for identifying U.S. forces “by 1 March with a ‘through’ date of October.”

The military sources indicated that U.S. forces will be augmented by an Aegis warship, presumably one of the two in the U.S. carrier task forces scheduled to be in the Persian Gulf.

The Aegis combat system on U.S. Navy ships is used to track and guide weapons to destroy intended targets and to act as a protective shield to counter ballistic missile threats.

The U.S. carrier task forces returned and have recently been augmented to patrol around the Strait of Hormuz, which the Iranians have threatened to block if the Islamic republic is attacked or if increased sanctions are put into effect to halt the export of oil.

Pentagon spokesman Navy Cmdr. Bill Speaks told WND there was “nothing to what your sources are saying,” but he also quickly added that the Pentagon “doesn’t discuss what future contingency plans we have, and I am not going to discuss this with you.”

Panetta first revealed the prospect of Israeli action in a Feb. 2 published interview with Washington Post columnist David Ignatius, although the defense secretary was quick to point out that his comments were not intended to send any type of signal.

In that interview, Panetta told Ignatius that he had cautioned the Israelis that “the United States opposes any attack,” although the columnist pointed out that this was not a direct quote.

Until now, the Obama administration has stated that it doesn’t want to be involved in any conflict with Iran unless U.S. assets are attacked – in which case there would be a strong U.S. response.

The apparent U.S. war plans, based on what U.S. military sources tell WND, suggest that the U.S. may not wait for an attack on U.S. assets before responding and instead may be preparing to assist the Israelis in an attack on Iran’s nuclear facilities.

Panetta first made his comments following meetings with Israeli officials who said that an Israeli strike on Iran’s nuclear facilities would come before entering a “zone of immunity,” or point beyond which it would be impossible to halt what Israel believes is a program to make nuclear weapons.

Iran contends that its nuclear development program, which includes enrichment, is for peaceful purposes and is its “inalienable right” as a signatory to the Nuclear Non-Proliferation Treaty, or NPT.

Iran also has allowed inspectors from the International Atomic Energy Agency, or IAEA, to look at its facilities.

Iran also has stated that it needs the enriched uranium to fuel its nuclear reactors.

Iran has a few research reactors and has a larger reactor built by the Russians at Bushehr. Discussions are under way between Iranian and Russian officials for the construction of addition reactors.

The Iranians contend that they have enriched uranium up to 20 percent, which is a level needed for medical purposes. Enrichment greater than 90 percent is needed to make nuclear weapons, but U.S. analysts assess that Iran has run into some technical obstacles precluding that level of enrichment to date.

On Wednesday, Iran announced that it had loaded the first batch of its home-made uranium rods into a Tehran research reactor, since it was unable to obtain them from other countries due to the Western-imposed sanctions.

Israel is assessed by the U.S. intelligence community to have some 400 strategic and tactical nuclear weapons. Unlike Iran, however, Israel refuses to be a signatory to the NPT.

Israel also intends to build a number of civilian nuclear plants for energy and has suggested building one as a joint project with Jordan under French supervision.

Possible U.S. military preparations to assist Israel coincide with the revelation by similar sources that the Israelis have dispatched a number of naval vessels under cover into the Arabian Sea and that they are moving into its northern regions just off of Iran.

According to the U.S. military sources, the Israeli vessels were positioned at the mouth of the Gulf of Oman which leads to the Strait of Hormuz.

Placement of the covert naval vessels in the northern Arabian Sea allows Israel to use them as a standoff C4ISR, or Command, Control, Communications, Computers, Intelligence, Surveillance and Reconnaissance platform.

This would give the Israelis the capability of not only intelligence-gathering on Iranian communications of its missile and air defense activities but also to coordinate attacks employing jet fighters, missiles and missile-carrying submarines in the event Israeli forces get the order to strike Iran’s nuclear facilities.

Such an attack also would require knocking out Iran’s ground-to-air missile facilities along its coast and near intended targets.

War-planners tell WND that there would be a multi-pronged approach by Israel using a combination of its nuclear-capable Jericho II missiles, attacks using its fleet of U.S.-supplied F-15E Strike Eagles and commandos to gather forensics at the sites and help illuminate the targets.

Sources say that if Israel were to use the U.S.-supplied F-15 jet fighters in a pre-emptive strike on Iran, there may be some concern at the State Department of a major violation of the munitions control limits placed as a condition for their use for defensive purposes.

This article was originally posted at: http://www.wnd.com/2012/02/u-s-military-told-to-prepare-for-iran-ops/

F. Michael Maloof, a writer for WND’s G2Bulletin, is a former senior security policy analyst in the office of the Secretary of Defense.