Warning: Use of undefined constant REQUEST_URI - assumed 'REQUEST_URI' (this will throw an Error in a future version of PHP) in /homepages/5/d699574795/htdocs/radicalsurvivalism-com/web/wp-content/themes/editorialmag/functions.php on line 73
 Are You Making the FBI Suspicious? See The Fliers That Reveal What They’re Looking For – Radical Survivalism
Skip to content
Current Events Politics 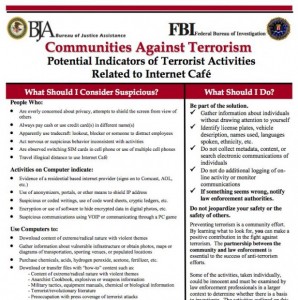 Do you pay for your coffee each day with cash? Express an interest in remote-controlled airplanes? According to fliers created by the FBI and Bureau of Justice Assistance for distribution to a variety of businesses, this could be considered indications of terrorist tendencies, the Huffington Post reports.

The 25 fliers part of the campaign “Communities Against Terrorism” are targeted toward “threat areas,” which include airport service providers, beauty/drug suppliers, construction sites, hobby shops, Internet cafes, martial arts, rental cars and tattoo parlors, among others. Each target area comes with a downloadable flier profiling activity employees could look for to detect potential terrorists. See all the fliers here.

It is unclear when exactly these fliers were produced, but a grant number that funded the fliers, as printed at the bottom of each template, appears to have been issued in 2007.

Here are just a few samplings of suspicious activity labeled as warning signs within some of the fliers:

The fliers also include more of the warning signs that you might expect, such as voicing anti-American or extremist sentiments, trying to “piggy back” into secure areas and unwillingness to provide complete identification in necessary situations. Some of the signs on the lists are suspicious but interestingly many are also completely normal actions taken with innocent intent by innocent people (like paying for a coffee with cash).

For this reason, each flier also notes that “It is important to remember that just because someone’s speech, actions, beliefs, appearance, or way of life is different; it does not mean that he or she is suspicious.”

The fliers began emerging earlier this month on the Internet, although they were not released publicly by the departments, according to Public Intelligence, which is hosting downloadable versions of the fliers on its site.

Communities Against Terrorism was funded by the BJA through its SLATT program (State and Local Anti-Terrorism Training (SLATT) Program) “to provide law enforcement agencies with a tool to engage members of the local community in the fight against terrorism.” It says that to help law enforcement educate their communities about the program, fliers “containing potential indicators” were created for distribution.

It is unclear when exactly the fliers were released to the public, but the bottom of each flier has a 2007 grant number that was used to support the project.

This article was originally posted at http://www.theblaze.com/stories/are-you-making-the-fbi-suspicious-see-the-fliers-that-reveal-what-theyre-looking-for/