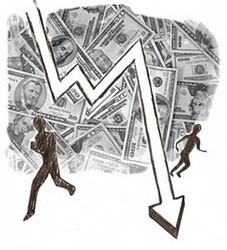 It has become increasingly difficult to engage in credible economic analysis, especially with respect to the U.S. economy. The problem: ever more limited sources of uncorrupted data, while the farcical “official statistics” have long since been totally divorced from the real world.

Fortunately we have been presented with some raw, uncorrupted data which demonstrates in conclusive terms that the U.S. economy is literally shriveling before our eyes: a 21st century economy with plummeting energy consumption, and even a declining use of electricity.

As I was sifting through all of Bloomberg’s propaganda on the latest U.S. trade numbers (and trying to latch onto a few facts), I came across one very peculiar passage:

Exports increased 0.7 percent to $178.8 billion, boosted by record sales of petroleum to buyers overseas. That caused the trade gap excluding petroleum to widen even more than the deficit overall…

The great U.S. economy, the largest oil-glutton in the history of humanity (by several multiples) is now a “net energy exporter”. How can this be possible? The U.S. economy has contracted so severely (already) that the only way that U.S. refineries can sell all the petroleum products they produce is to sell them to the growing economies of “emerging market” nations.

Reflecting the broad-based collapse of the U.S. economy, these refineries are now exporting all categories of petroleum products: diesel, jet fuel, and even gasoline are now being exported in large quantities, month-after-month by U.S. refineries. Recall that it was only four, short years ago that many American politicians were alarmed by the crisis of the “lack of U.S. refining capacity”. No new refineries have been constructed in the U.S. in more than 30 years, and at that time those refineries were straining to meet the demand of solely the U.S. domestic market. With that domestic market collapsing, these refineries are now straining to find enough foreign buyers to unload all of their inventories.

Given these facts alone, it is utterly absurd for the U.S. government to pretend that the U.S. economy is growing. Note that the government claims that most of this growth is occurring in agriculture and manufacturing – both very energy-intensive industries. There’s no doubt that the energy-intensive agriculture sector is thriving, a result of a growing global “appetite” and Wall Street-induced shortages in most commodities. So with the large U.S. agriculture sector gobbling up more energy than ever, what does that say about the rest of the (decaying) U.S. economy?

Let us not forget that the U.S. population continues to grow. More people using much, much, less energy; and this is called a “growing economy”? Absurd. Even more absurd, this steadily growing population has been using much less electricity, going back to around 2007.

Mark Lundeen provided a very detailed analysis of the consumption of U.S. electricity in a recent commentary. It shows U.S. electrical consumption peaking in approximately 2006, and then beginning a distinct decline starting in 2007. Yes, power demand has “bounced back” somewhat from the worst of the collapse – but at levels still more than 3% lower than in 2007. Put another way, the supposed “U.S. economic recovery” has only resulted in roughly half of that lost demand being restored.

This minimal boost in electrical demand reflects nothing more than pent-up demand from the increase in population which has taken place since 2007, and in no way is suggestive of any economic growth. And we must keep in mind that this is taking place in a climate of ultra-insane monetary policy: interest rates permanently frozen at 0%. Even with this maximum stimulus, the dying U.S. economy is unable to come close to maintaining its level of demand for electricity.

We must also never forget that all of this decline in energy and electricity consumption comes after the largest/most reckless fiscal stimulus as well. The U.S., with by far the world’s largest national deficit (even using the absurd, official number), has not yet begun the fiscal tightening being attempted in most other Western nations (with the notable exception of Canada).

What happens when this dying economy actually turns off the taps with all of this “easy money” from the government (which the U.S. government obviously cannot afford)? If the most insane/extreme fiscal and monetary stimulus in the history of the global economy has produced nothing but further economic decay, what happens when this unsustainable stimulus ceases to be sustained?

How sick is the U.S. economy? Bloomberg was recently trumpeting the news that construction of “multi-family units” in the U.S. housing market (the low end of the market) was rising to the same level as in 2008. Yes, and everyone can remember what a wonderful year that 2008 was for U.S. housing. And this is the good news?

Actually it is. Construction of single-family units remain at all-time lows since they first began gathering such data on the U.S. housing market. Thus we are to believe that the U.S. economy is growing and producing new, net jobs each month with plummeting energy consumption, declining usage of electricity, and with the propagandists cheering the housing market because things are now only as bad as they were in 2008.

Again, what happens when the unsustainable stimulus can no longer be sustained?

This is a dying economy in the midst of a Greater Depression. Even with B.S. Bernanke’s permanent 0% interest rates (something which would have been totally unthinkable just four years earlier), this monetary defibrillator cannot continue to feign “life” in this economic corpse. The moment that fiscal tightening inevitably begins, the full brunt of the U.S.’s Greater Depression will bludgeon the American people – and hopefully (finally) awaken then from their terminal apathy.

Any further pretensions of economic growth and job-creation can now only be regarded as absurd and transparent fiction. The world’s great energy glutton is claiming a robust “economic recovery” without using any energy. The statistical charlatans at work for the U.S. government can pretend there is positive GDP growth. They can pretend there is positive jobs growth. But they cannot pretend to consume energy.

There was never any “economic reckoning” for the U.S. economy following the economic collapse which began (in earnest) in 2007. Reckless money-printing (the most reckless in history); reckless fiscal spending (the most reckless in history); and absurd statistical lies (the largest in history) have merely provided a coat of whitewash over top of this economic train-wreck…and now the paint is beginning to peel. [Related: ProShares UltraShort S&P 500 ETF (NYSEArca:SDS), Direxion Daily Financial Bear 3X ETF (NYSEArca:FAZ)]

Jeff Nielson is from Canada and is a writer/editor for Bullion Bulls Canada www.bullionbullscanada.com.   He has a personal background in law and economics. Bullion Bulls  Canada provides general macro-economic and political commentary,  since  the precious metals markets are among the most complex (and  misunderstood) in the world.

Bullion Bulls Canada also provides basic coverage of Canadian precious metals mining companies. Canada is the global leader in mining exploration, and Canadian-listed mining companies (on the Toronto Stock Exchange and Venture Exchange) are responsible for the majority of the world’s most-promising discoveries.