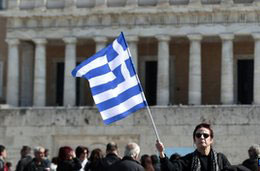 Rating agency Standard & Poor’s has classified Greek debt as in “selective default” following the deal it made with creditors to reduce its debts.

S&P says the terms of that deal triggered the latest downgrade. Greek debt already had a “junk” grade rating from the agency.

Separately, the European Central Bank said it was suspending the eligibility of Greek bonds as collateral for loans to commercial banks.

It said this would run until mid-March.

The ECB explained that by the middle of next month it would start to accept the bonds again, because a programme for eurozone nations to provide supplementary collateral to insure the ECB against losses is due to come into effect.

Banks and other financial firms are being asked by Greece’s government to take a 53.5% loss on their Greek sovereign bonds.

The plan was agreed by the Greek parliament last week, and, if backed by Greece’s creditors, it would wipe out 107bn euros (£90bn; $142bn) of the country’s debt.

S&P said that when the debt exchange was complete it would assess Greece again and possibly raise its rating.

The Greek government said S&P’s move had been expected and added it would not hurt the banking industry.

“This rating does not have any impact on the Greek banking system since any likely effect on liquidity has already been dealt with by the Bank of Greece,” the finance ministry said in a statement.

This article was originally posted at http://www.bbc.co.uk/news/business-17187068