From Yahoo! News Canada via AFP 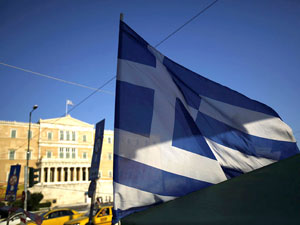 Moody’s declared Greece in default on its debt Friday after Athens carved out a deal with private creditors for a bond exchange that will write off 107 billion euros ($140 billion) of its debt.

Moody’s pointed out that even as 85.8 percent of the holders of Greek-law bonds had signed onto the deal, the exercise of collective action clauses that Athens is applying to its bonds will force the remaining bondholders to participate.

Overall the cost to bondholders, based on the net present value of the debt, will be at least 70 percent of the investment, Moody’s said.

“According to Moody’s definitions, this exchange represents a ‘distressed exchange,’ and therefore a debt default,” the US-based rating firm said.

For one, “The exchange amounts to a diminished financial obligation relative to the original obligation.”

Secondly, it “has the effect of allowing Greece to avoid payment default in the future.”

Ahead of the debt deal, Moody’s had already slashed Greece’s credit grade to its lowest level, “C,” and so there was no impact on the rating.

Moody’s said it will revisit the rating to see how the debt writedown, and the second eurozone bailout package, would affect its finances.

However, it added, at the beginning of March “Moody’s had said that the risk of a default, even after the debt exchange has been completed, remains high.”

This article was originally posted at: http://ca.news.yahoo.com/moodys-declares-greece-default-debt-232804003.html