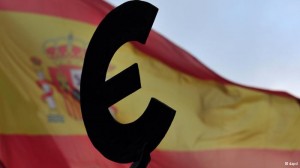 FRANKFURT (MarketWatch) — Spain saw borrowing costs rise Thursday in a closely-watched debt auction, but topped its target range, selling a total of 2.07 billion euros ($2.6 billion) of government debt, news reports said. Spain’s Treasury had aimed to sell a total of 1 billion to 2 billion euros of debt. A sale of 10-year government bonds produced an average yield of 6.04%, up from 5.74% in a previous sale, Bloomberg reported. Bids exceeded supply 3.29 times, up from a bid-to-cover of 2.56 in a previous auction, the report said. Spain also sold bonds maturing in 2014 and 2016. In the secondary market, the yield on 10-year Spanish government bonds was down 0.13 percentage point at 6.14%, according to FactSet.

This article was originally posted at http://www.marketwatch.com/story/spain-sells-207b-euros-of-bonds-tops-target-2012-06-07