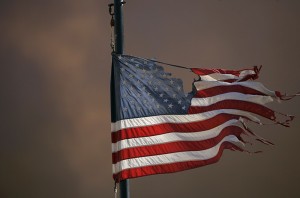 I found this comment this morning on TheBlaze.com following an article about House Speaker John Boehner removing several of Congress’s most outspoken fiscal hawks from committees dealing with fiscal matters…

“I say it is time to quench the thirst of the tree of liberty. And yes, I do mean Jefferson style.

This nation has been usurped by elitist government class. They’re better than the rest of us. They make the rules but aren’t required to follow them. They use OUR money to buy off votes and bail out their friends. They enrich themselves and line their own pockets.

They’re the ruling class and “We The People” are the subservient class. Its exactly backward from what it should be. Until this changes you’ll remain a slave to a government that runs every aspect of your life and picks your pockets clean to prop themselves up.

Thomas Jefferson made that statement and it has never been more true than it is today. We The People need to Instill the FEAR OF GOD in in our elected officials. Until that happens, enjoy your chains & shackles and the bread crumbs they allow you to have after their feasts.

What exists right now is NO DIFFERENT than when our Founders were being abused by the British Monarchy. The King and his field marshals & generals learned to fear the Patriots who founded this country.

We are endowed by our creator with certain unalienable rights as a FREE PEOPLE. Our current government has designs to, and essentially has succeeded in stealing this away from you. It is very clear they intend to tax & spend this once proud nation into obliteration. Their purposeful intention is to crash this economy and the country. They’re taking everything you’ve ever had and everything you ever hoped to have in the future.

They have REFUSED to even pass a BUDGET for over 4 years which is in itself ILLEGAL. Now they’re proposing unlimited debt increases by executive fiat.”

I think it is important to read and ponder commentary such as this because I personally don’t think many Americans understand the political situation we now see ourselves in.We here at RSW go out and talk one-on-one with Conservative Americans by the hundreds at a time, and I can say without question that the sentiment articulated above is something we are hearing more and more lately, especially after this last disappointing Presidential election. Is this Conservative America blowing off steam? Perhaps instead, it is the beginning of something…more unsettling.