Warning: Use of undefined constant REQUEST_URI - assumed 'REQUEST_URI' (this will throw an Error in a future version of PHP) in /homepages/5/d699574795/htdocs/radicalsurvivalism-com/web/wp-content/themes/editorialmag/functions.php on line 73
 Michael Moore Speaks On Gun Control…For Everyone Else – Radical Survivalism
Skip to content
Current Events 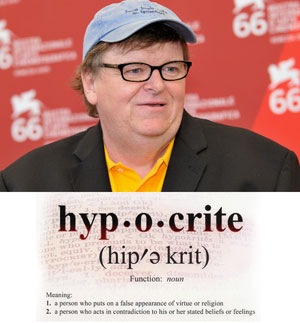 In response to the Sandy Hook shooting last week in CT, filmmaker Michael Moore has been very vocal about his disdain for Americans’ desire to own firearms per our Second Amendment rights.

“We’ve got over a quarter-billion guns in people’s homes. And they’re mostly in the suburbs and rural areas where there is virtually no crime and no murder. So why is that? What are they really afraid of? What do they think of — who’s going to break into the house?” he asked.

“Do they think it’s little freckled-face Jimmy down the street? I don’t think so. I don’t think that’s who they’re afraid of. And it cuts down to the heart of our race problem that we still haven’t resolved,” Moore said.

Which brings us to this story from FoxNews.com on January 20th, 2005:

Police took Patrick Burke, who says Moore employs him, into custody after he declared he was carrying a firearm at a ticket counter. Burke is licensed to carry a firearm in Florida and California, but not in New York. Burke was taken to Queens central booking and could potentially be charged with a felony for the incident.

Moore’s 2003 Oscar-winning film “Bowling for Columbine” criticizes what Moore calls America’s “culture of fear” and its obsession with guns.

We rarely find this level of blatant hypocrisy outside of our own Federal Government.