By Tekoa Da Silva | From BullMarketThinking.com | On Friday, December 28th, 2012 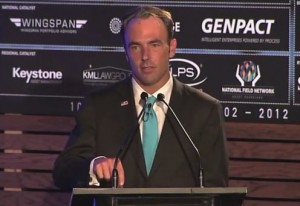 In a follow up presentation to the AmeriCatalyst Group, Hayman Capital fund manager Kyle Bass shares thoughts on a number of key issues facing the world over the next few years. Among those that stood out, was the inevitability of a major war, escalation of food riots, and why the government’s job is to maintain confidence over truth.

Excerpts are show here below:

“We sit today at the world’s largest peacetime accumulation of debt in world history…you know how this ends right? This ends through war…

I don’t know who’s going to fight who, but I’m fairly certain in the next few years you will see wars erupt, and not just small ones…”

“You’re going to see more social unrest. You saw HUGE riots in Greece, and you’re seeing HUGE riots in other parts of the world over food (and lack of food) and those are actually derivatives of the financial problems that we’re seeing. We’re exporting inflation to some other nations. Going forward it’s going to be a problem.”

We recently had dinner with the deputy governor of the bank of japan, he just finished a speech denouncing money printing, or quantitative easing. We said ‘Wait a minute, when you expand your balance sheet to buy bonds, we call that money printing, what do you call it?’ He conferred with his advisers, came back and said, ‘When the market tells us it’s money printing, it’ll be money printing. When the rates go up and not down when we buy bonds, THEN it’s monetizing the deficit.”

“We just look at Gold as another currency that you can’t print…Limitless credit creation is probably a bad idea.”

Very revealing indeed. To see these comments coming from one of the world’s leading hedge fund managers is quiet an eye-opener. Thoughts?

This article was originally posted at http://bullmarketthinking.com/kyle-bass-this-ends-in-war-the-governments-never-going-to-tell-you-that-its-going-to-happen/