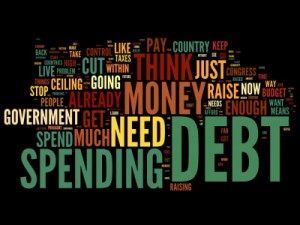 The U.S. government on Monday officially reached it $16.4 trillion borrowing limit, a grim reminder of the state of the country’s finances.

Reaching the limit sets up another dispute between the White House and Congress over taxes and spending in the new year.

Treasury Secretary Timothy Geithner says the government will take a series of accounting measures to avoid defaulting on its debt. On Monday, it suspended the issuance of new debt for two government retirement funds.

Last week, Geithner said the measures would save about $200 billion and avoid default for about two months.

Geithner said it is difficult to predict how long default can be avoided because of ongoing negotiations over tax and budget policies.

The debt limit is the amount the government can borrow to help finance its operations.

This article was originally posted at http://www.theblaze.com/stories/its-official-u-s-hits-16-4t-debt-limit/