By Almudena Calatrava | From MyFoxNY.com | On Monday, February 4th, 2013 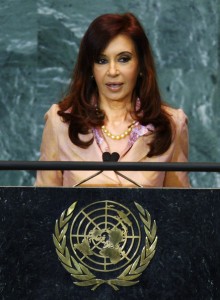 The price freeze applies to every product in all of the nation’s largest supermarkets — a group including Walmart, Carrefour, Coto, Jumbo, Disco and other large chains. The companies’ trade group, representing 70 percent of the Argentine market, reached the accord with Commerce Secretary Guillermo Moreno, the government’s news agency Telam reported.

The commerce ministry wants consumers to keep receipts and complain to a hotline about any price hikes they see before April 1.

Polls show Argentines worry most about inflation, which private economists estimate could reach 30 percent this year. The government says it’s trying to hold the next union wage hikes to 20 percent, a figure that suggests how little anyone believes the official index that pegs annual inflation at just 10 percent.

The government announced the price freeze on the first business day after the International Monetary Fund formally censured Argentina for putting out inaccurate economic data. The IMF has given Argentina until September to bring its statistics up to international standards, or face expulsion from the world body in November.

President Cristina Fernandez and her economy minister, Hernan Lorenzino, responded over the weekend with a flurry of attacks on the IMF, saying the agency’s data-gathering efforts had lost credibility in the lead-up to Argentina’s historic 2001 debt default. They said IMF advice is leading Europeans astray by favoring big banks over measures that can grow economies out of crisis.

However, Lorenzino also said that the government will begin using a new inflation index starting in fourth-quarter 2013 — just in time for the IMF’s decision.

—
This article was originally posted at: http://www.myfoxny.com/story/20958959/argentina-freezes-prices-to-break-inflation-spiral
Editor’s note: Economics 101…if you freeze prices, supply goes away and you’re left with a country full of hungry people. But, Argentinians should know, because they’ve been through all this before.