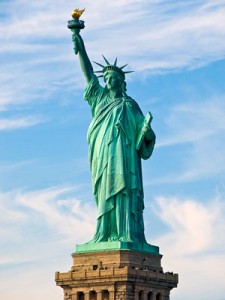 by Peg Luksik
In the debate over illegal immigration, perhaps we should begin with the words of the Emma Lazarus poem inscribed on the base of the Statue of Liberty:

Give me your tired, your poor,

It’s interesting that America did not ask for the rich and famous, she welcomed those who had nothing. And they came by the thousands. In fact, almost all of us can identify at least one ancestor who passed by that inscription.

The question that needs to be asked in today’s debate is, “Why did they come?”

The short answer is that in America they didn’t HAVE TO be a member of the huddled masses. If they followed the rules and worked hard, they had a chance to climb out of the huddle. It was as if America suspended a ladder over the head of every person who passed that Statue, and offered that person the challenge of climbing it. And while a guarantee of success is never possible, there was a guarantee of opportunity for those willing to accept America’s challenge.

It didn’t matter what country you came from because now you were an American. And our ancestors were proud to proclaim themselves as such. They embraced the culture, the language, and the opportunity, and built a place that continues to attract those who want something more for themselves and their children.

Illegal immigration attacks every aspect of that reality.

The attack begins with undermining the very foundation of the liberty that sustains our greatness – equality before the law. Illegal immigration says that only some people have to follow the rules, that behavior has only has consequences some of the time. And when those who try to follow the rules see that the ones who break them are not only allowed to do so, but actually receive benefits from their noncompliance, the ranks of the non-compliant grow.

The second attack is on the illegal immigrants themselves. Most of them came for the same reasons as the people who passed by our Statue. They were looking for something more.

Our immigrant ancestors, who followed the rules, either learned English themselves, or made sure their children did, as quickly as possible. So they did not require an organization of translators to help them participate in American life. They got legitimate jobs, where they not only paid taxes, but they could be promoted. So they did not require the assistance of any government agency. They not only voted, they could run for office. So they could become full participants in not just our culture, but our government.

For the most part, illegal immigrants don’t learn to speak English, they don’t get legitimate jobs, and they can’t run for office. The ladder of opportunity that comes with entering America correctly is never offered to them.

Instead, America now has a sub-culture that is not American existing within its borders.

And the combination of rewarding rule-breaking and enabling a non-American culture creates a progression that eventually moves a society from liberty-based-on-law to anarchy-based-on-fear to tyranny-based-on-power.

When that progression is completed, America will no longer need to worry about illegal immigration.

This article appears in the current Constitution Party Of Indiana newsletter entiteld “Why Did They Come?”.

You may find Peg Luksik’s archives of older articles and subscribe to receive them weekly at no charge by visiting www.CenterforAmericanHeritage.com