What follows is an article written about one of the most sinister and utterly depraved decisions made by a modern-day elected official that I have ever read. 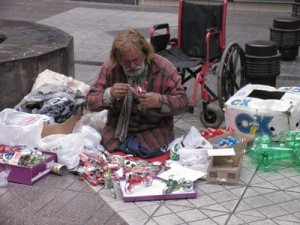 Apparently going without is more nutritious than having food that is not nutritionally perfect. At least in Michael Bloomberg’s eyes it is. I will admit I will savor chips, cocktail weenies and sugary punches when I wandered the streets as I lacked cooking facilities to make proper food. I also dumpster-dived to supplement my intake as I found those food choices lacking for the carbo and protein burning rigors of sleeping outdoors and carrying everything I owned on my back. Homeless and hungry tip-Trader Joe’s has awesome noms from the dumpster.

The Bloomberg administration is now taking the term “food police” to new depths, blocking food donations to all government-run facilities that serve the city’s homeless.In conjunction with a mayoral task force and the Health Department, the Department of Homeless Services recently started enforcing new nutritional rules for food served at city shelters. Since DHS can’t assess the nutritional content of donated food, shelters have to turn away good Samaritans…

…They’ve brought freshly cooked, nutrient-rich surplus foods from synagogue events to homeless facilities in the neighborhood. (Disclosure: I know the food is so tasty because I’ve eaten it — I’m an OZ member.) The practice of donating such surplus food to homeless shelters is common among houses of worship in the city.

I wonder how many Jewish Grandmothers will wake up today to find out what they have fed their families for generations is too unhealthy to feed starving people?

As I pointed out in an unrelated comment earlier, follow the money. There has to be a more plausible reason for this cutting off food resources from the poor. Are they going to then claim the shelters must be closed because they can no longer feed them? Will they substitute variety with oatmeal three times a day? It is healthy, but exceedingly bland thus reducing the homeless from wanting to dine there. Are they hoping that the homeless will now go to restaurants in the city to purchase food?

I know of very few homeless that care if their food has too much fat, salt, calories or if they are eating the pyramids proportional values every day. They just want enough food to keep away the shakes from the lack of calories in their system.

This is where the homeless turn for a meal if they have a couple of bucks in their pocket and they need food:

They can’t cook anything so almost everything else is out. And if denying food donations negatively impact shelters, they will turn away people that do need help.

What this boils down to is criminalizing poverty.

What does this say about us as a society and our ability to elect representation? Are we really willing to embark on this path as a country? What would our forefathers think of us? Is there anyone out there who actually believes we won’t be held accountable as a society for allowing this to happen?

Perhaps this will help to clarify to anyone who is not aware, how caring for the truly needy is supposed to be handled:

Isaiah 58:10 ESV:  If you pour yourself out for the hungry and satisfy the desire of the afflicted, then shall your light rise in the darkness and your gloom be as the noonday.

Proverbs 28:27 ESV: Whoever gives to the poor will not want, but he who hides his eyes will get many a curse.

Luke 3:11 ESV:  And he answered them, “Whoever has two tunics is to share with him who has none, and whoever has food is to do likewise.”

Matthew 14:15-21 ESV:  Now when it was evening, the disciples came to him and said, “This is a desolate place, and the day is now over; send the crowds away to go into the villages and buy food for themselves.” But Jesus said, “They need not go away; you give them something to eat.” They said to him, “We have only five loaves here and two fish.” And he said, “Bring them here to me.” Then he ordered the crowds to sit down on the grass, and taking the five loaves and the two fish, he looked up to heaven and said a blessing. Then he broke the loaves and gave them to the disciples, and the disciples gave them to the crowds. …

John 6:35 ESV:  Jesus said to them, “I am the bread of life; whoever comes to me shall not hunger, and whoever believes in me shall never thirst.

Romans 12:20 ESV:  To the contrary, “if your enemy is hungry, feed him; if he is thirsty, give him something to drink; for by so doing you will heap burning coals on his head.”

Deuteronomy 8:1-20 ESV:  “The whole commandment that I command you today you shall be careful to do, that you may live and multiply, and go in and possess the land that the Lord swore to give to your fathers. And you shall remember the whole way that the Lord your God has led you these forty years in the wilderness, that he might humble you, testing you to know what was in your heart, whether you would keep his commandments or not. And he humbled you and let you hunger and fed you with manna, which you did not know, nor did your fathers know, that he might make you know that man does not live by bread alone, but man lives by every word that comes from the mouth of the Lord. Your clothing did not wear out on you and your foot did not swell these forty years. Know then in your heart that, as a man disciplines his son, the Lord your God disciplines you. …

James 2:14-18 ESV:  What good is it, my brothers, if someone says he has faith but does not have works? Can that faith save him? If a brother or sister is poorly clothed and lacking in daily food, and one of you says to them, “Go in peace, be warmed and filled,” without giving them the things needed for the body, what good is that? So also faith by itself, if it does not have works, is dead. But someone will say, “You have faith and I have works.” Show me your faith apart from your works, and I will show you my faith by my works.

John 6:47-50 ESV:  Truly, truly, I say to you, whoever believes has eternal life. I am the bread of life. Your fathers ate the manna in the wilderness, and they died. This is the bread that comes down from heaven, so that one may eat of it and not die.

Isaiah 53:1-12 ESV:  Who has believed what he has heard from us? And to whom has the arm of the Lord been revealed? For he grew up before him like a young plant, and like a root out of dry ground; he had no form or majesty that we should look at him, and no beauty that we should desire him. He was despised and rejected by men; a man of sorrows, and acquainted with grief; and as one from whom men hide their faces he was despised, and we esteemed him not. Surely he has borne our griefs and carried our sorrows; yet we esteemed him stricken, smitten by God, and afflicted. But he was wounded for our transgressions; he was crushed for our iniquities; upon him was the chastisement that brought us peace, and with his stripes we are healed. …

1 Timothy 1:1-20 ESV:  Paul, an apostle of Christ Jesus by command of God our Savior and of Christ Jesus our hope, To Timothy, my true child in the faith: Grace, mercy, and peace from God the Father and Christ Jesus our Lord. As I urged you when I was going to Macedonia, remain at Ephesus so that you may charge certain persons not to teach any different doctrine, nor to devote themselves to myths and endless genealogies, which promote speculations rather than the stewardship from God that is by faith. The aim of our charge is love that issues from a pure heart and a good conscience and a sincere faith. …

John 6:1-71 ESV:  After this Jesus went away to the other side of the Sea of Galilee, which is the Sea of Tiberias. And a large crowd was following him, because they saw the signs that he was doing on the sick. Jesus went up on the mountain, and there he sat down with his disciples. Now the Passover, the feast of the Jews, was at hand. Lifting up his eyes, then, and seeing that a large crowd was coming toward him, Jesus said to Philip, “Where are we to buy bread, so that these people may eat?” …

Mark 16:19-20 ESV:  So then the Lord Jesus, after he had spoken to them, was taken up into heaven and sat down at the right hand of God. And they went out and preached everywhere, while the Lord worked with them and confirmed the message by accompanying signs.]]

2 Samuel 1:1-27 ESV:  After the death of Saul, when David had returned from striking down the Amalekites, David remained two days in Ziklag. And on the third day, behold, a man came from Saul’s camp, with his clothes torn and dirt on his head. And when he came to David, he fell to the ground and paid homage. David said to him, “Where do you come from?” And he said to him, “I have escaped from the camp of Israel.” And David said to him, “How did it go? Tell me.” And he answered, “The people fled from the battle, and also many of the people have fallen and are dead, and Saul and his son Jonathan are also dead.” Then David said to the young man who told him, “How do you know that Saul and his son Jonathan are dead?” …