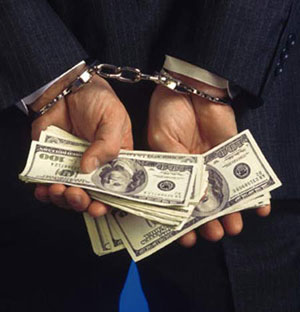 One argument you’ll hear from the majority of Americans who refuse to wake up to the madness around them is that if there truly was an economic and financial cabal in cahoots with the government we would have heard about it. If this was actually happening, wouldn’t there be insiders from the private and public sectors that would have alerted us to the conspiracies? And wouldn’t the mainstream media report on it? And wouldn’t the Justice Department vigorously pursue and prosecute those responsible for the fraud, theft and manipulation?

It turns out that there are whistle-blowers – hundreds of them. But any attack on the establishment is met with either a full-on counter-attack that targets the credibility of the individual bringing forth the information and marginalizes the content of the message by dismissing it as the ravings of a lunatic or disgruntled employee, or, it’s simply erased from public view by the very institutions tasked with investigating such activity.

Yesterday, an open letter posted in the public comments section at the Commodity Futures Trading Commission (CFTC) by a self described JP Morgan insider and whistle-blower was removed in short order (no cache of the page exists, but it was briefly indexed by search engines). It was dead on arrival. A direct link to the letter now leads to an empty page in the hopes that it will never be seen by the 99% of Americans who tune in only to mainstream news sources for their daily dose of truth. Don’t worry, though, because if there’s one thing alternative news media learned from Orwell’s 1984 and real world experience, it’s that we should always expect the powers that be will attempt to rewrite history. As such, the full content of the post has been copied and archived for posterity’s sake by alternative media (and reprinted below).

In the letter, the JP Morgan insider reveals that high level executives and traders at the bank are putting the investments and savings of thousands, if not millions, of hard working Americans at risk of complete, wide-scale market collapse through their machinations and fraudulent practices. Moreover, he suggests that executives at his bank are fully aware of commodity manipulations in which the bank engages, as well as the risks posed by a European collapse, an event that, according to the whistle-blower, will lead to annihilation of investments within a matter of days.

Hello, I am a current JPMorgan Chase employee. This is an open letter to all commissioners and regulators. I am emailing you today b/c I know of insider information that will be damning at best for JPMorgan Chase. I have decided to play the role of whistleblower b/c I no longer have faith and belief that what we are doing for society is bringing value to people. I am now under the opinion that we are actually putting hard working Americans unaware of what lays ahead at extreme market risk. This risk is unnecessary and will lead to wide-scale market collapse if not handled properly. With the release of Mr. Smith’s open letter to Goldman, I too would like to set the record straight for JPM as well. I have seen the disruptive behavior of superiors and no longer can say that I look up to employees at the ED/MD level here at JPM. Their smug exuberance and arrogance permeates the air just as pungently as rotting vegetables. They all know too well of the backdoor crony connections they share intimately with elected officials and with other institutions. It is apparent in everything they do, from the meager attempts to manipulate LIBOR, therefore controlling how almost all derivatives are priced to the inherit and fraudulent commodities manipulation. They too may have one day stood for something in the past in the client-employee relationship. Does anyone in today’s market really care about the protection of their client? From the ruthless and scandalous treatment of MF Global client asset funds to the excessive bonuses paid by companies with burgeoning liabilities. Yes, we at JPMorgan that are in the know are fearful of a cascading credit event being triggered in Greece as they have hidden derivatives in excess of $1 Trillion USD. We at JPMorgan own enough of these through counterparty risk and outright prop trading that our entire IB EDG space could be annihilated within a few short days. The last ten years has been market by inflexion point after inflexion point with the most notable coming in 2008 after the acquisition of Bear.

I wish to remain anonymous as of now as fear of termination mounts from what I am about to reveal. Robert Gottlieb is not my real name; however he is a trader that is involved in a lawsuit for manipulative trading while working with JPMorgan Chase. He was acquired during our Bear Stearns acquisition and is known to be the notorious person shorting in the silver future market from his trading space, along with Blythe Masters, his IB Global boss. However, with that said, we are manipulating the silver futures market and playing a smaller (but still massively manipulative) role in manipulating the gold futures market. We have a little over a 25% (give or take a percentage) position in the short market for silver futures and by your definition this denotes a larger position than for speculative purposes or for hedging and is beyond the line of manipulation.

On a side note, I do not work directly with accounts that would have been directly impacted by the MF Global fiasco but I have heard through other colleagues that we have involvement in the hiding of client assets from MF Global. This is another fraudulent effort on our part and constitutes theft. I urge you to forward that part of the investigation on to the respective authorities.

There is something else that you may find strange. During month-end December, we were all told by our managers that this was going to be a dismal year in terms of earnings and that we should not expect any bonuses or pay raises. Then come mid-late January it is made known that everyone received a pay raise and/or bonus, which is interesting b/c just a few weeks ago we were told that this was not likely and expected to be paid nothing in addition to base salary. January is right around the time we started increasing our short positions quite significantly again and this most recent crash in gold and silver during Bernanke’s speech on February 29th is of notable importance, as we along with 4 other major institutions, orchestrated the violent $100 drop in Gold and subsequent drops in silver.

As regulators of the free people of this country, I ask you to uphold the most important job in the world right now. That job is judge and overseer of all that is justice in the most sensitive of commodity markets. There are many middle-income people that invest in the physical assets of silver, gold, as well as mining stocks that are being financially impacted in a negative way b/c of our unscrupulous shorts in the precious metals commodity sector. If you read the COT with intent you will find that commercials (even though we have no business being in the commercial sector, which should be reserved for companies that truly produce the metal) are net short by a long shot in not only silver, but gold.

It is rather surprising that what should be well known liabilities on our balance sheet have not erupted into wider scale scrutinization. I call all honest and courageous JPMorgan employees to step up and fight the cronyism and wide-scale manipulation by reporting the truth. We are only helping reality come to light therefore allowing a real valuation of our banking industry which will give investors a chance to properly adjust without being totally wiped out. I will be contacting a lawyer shortly about this matter, as I believe no other whistleblower at JPMorgan has come forward yet. Our deepest secrets lie within the hands of honest employees and can be revealed through honest regulators that are willing to take a look inside one of America’s best kept secrets. Please do not allow this to turn into another Enron.

Kind Regards,
-The 1st Whistleblower of Many

We wouldn’t bet on any of this actually being investigated by regulatory agencies, because according to President Obama and other politicians, nobody has committed any crimes.

What we would bet on is that this anonymous whistle blower isn’t just blowing smoke. Given the recent revelations of other insiders like Greg Smith, a former Goldman Sachs executive director of their equities derivatives business, who warned this week of a toxic and destructive environment at the government’s leading bailout darling, we’re of the belief that JP Morgan is no different.

The entire system is rigged, and they have most certainly done a great job of keeping it afloat and maintaining the illusion of stability in the eyes of the masses. One day, perhaps soon, the people will lose confidence in these firms and the government institutions that are complicit in their manipulations. When that happens, look out, because we’ve got decades of paper receipts and derivatives valued in the tens of trillions of dollars that will be shown to be worth absolutely nothing.

When this ponzi scheme finally comes down it will be unlike anything we’ve ever seen in terms of economic collapse and financial asset annihilation.

This article was originally posted at: http://www.shtfplan.com/headline-news/cftc-pulls-public-comments-from-jp-morgan-whistle-blower-we-are-fearful-of-a-cascading-credit-event-wide-scale-market-collapse_03162012