Warning: Use of undefined constant REQUEST_URI - assumed 'REQUEST_URI' (this will throw an Error in a future version of PHP) in /homepages/5/d699574795/htdocs/radicalsurvivalism-com/web/wp-content/themes/editorialmag/functions.php on line 73
 Researchers Predict Economic Collapse By 2030 – Radical Survivalism
Skip to content
Current Events Economics 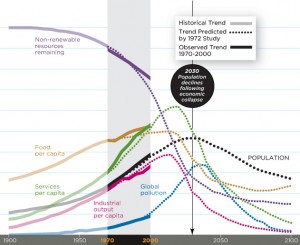 A new study by researchers at the Massachusetts Institute of Technology, say that the world will suffer an economic collapse before 2030 if trends continue.

Produced for a group called The Club of Rome, the study’s researchers created a computing model to forecast different scenarios based on the current models of population growth and global resource consumption. The study also took into account different levels of agricultural productivity, birth control and environmental protection efforts. …

The findings are similar to those found in 1972 by Australian physicist Graham Turner in his report titled, “The Limits of Growth.”

In fact, the 1972 report was the inspiration behind the study. Researchers Donnella Meadows, Dennis Meadows, Jorgen Randers and their research team (an international think tank called the Club of Rome) attempted to test Turner’s theory through computational models.

They created a computing model which took into account the relations between various global developments and produced computer simulations for alternative scenarios. Part of the modelling were different amounts of possibly available resources, different levels of agricultural productivity, birth control or environmental protection. (Read the Club of Rome article.)

The study also noted that unlimited economic growth was possible, if policies were enacted to invest in technologies that regulate ecological expansion.

Some economists disagreed with the findings, saying that the reports methodology and conclusions taken from the data, were stretched. Particularly, Yale’s Henry Wallich said that the report is “consigning billions to permanent poverty.” He disagrees that there is unlimited economic growth possible.

This article was originally posted at http://www.thereadystore.com/current-events/3327/researchers-predict-economic-collapse-by-2030/