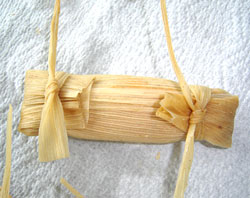 Homemade tamales are the best. If you have not made them in your own kitchen, here are a few tips and tricks.

The taste of tamales made at home is almost beyond description. It’s quite a process, however, and should be planned over a two-day period. The second day will be a long one. Tamale – or tamal – cooking will go much easier if you can round up two or more friends or family members to pitch in.

Since making tamales is a bit tedious, it’s best to go ahead and make a bunch. They freeze and reheat well and you’ll always have some handy for readymade meals.

About the corn husks

If you can’t find corn husks, or hojas, locally, purchase them online. Basically, it’s not worth the trouble without corn husks. It is their flavor that adds so much to a true tamale.

Second, you can save quite a bit of money if you have access to a local, small, Mexican market. Buying husks by the pound instead of pre-packaged in larger stores is much cheaper.

There are tradeoffs with husks by the pound and from small markets. They may have a few bugs and you’ll certainly find bug holes. Remember, these are corn products and it is no different than finding a bug in a bag of flour or similar product. It is best to freeze the husks for at least 24 hours and that will eliminate any living creatures. Let the husks come to room temperature.

You may also find a few husks with traces of old mold in some spots. Toss the worst of them; the majority of these husks should be fine for use.

A pound of hojas equals about 110 corn husks. You will get approximately 86 usable husks out of this batch. That excludes the husks you will need to tear into strips for tying the bundles (if you choose to use that method).

If you do use the tie-down method, save back some of the longer husks. The longer the string, the easier it is to use as a tie.

Soak the husks for a couple of hours. You should use a large pot as you will need the sink for other preparation.

Rinse really well and remove any silk – there shouldn’t be many strings. Even after a thorough rinsing, don’t be surprised if the husks still feel lightly gritty. Lay out on paper towels. You can stack the paper towels/corn husks in several layers.

It’s better to have too much meat than too little. Any leftover meat can be re-frozen or used in enchiladas or any number of other recipes. We had nearly a double batch with: 7 pounds pork shoulder butt, 2 three-pound hens, and 5 pounds of legs and thighs. We used a heaping tablespoon of meat for each tamale. If the corn husk was large, we used more masa mixture and more meat.

Use latex gloves and the de-fatting/shredding process will be much less messy.

When shredding, use a fork with the tines facing “up.” In other words, press the fork face up into the edges of the meat and you should get a good shred. Plowing into the meat with the fork upside down is not as effective.

You’ll need about 3 pounds of masa flour for 1 pound of husks. That’s about 3 tablespoons of dough per husk, give or take. Keep spare masa on hand in case you need to make a quick batch.

You will use quite a bit of broth to bring the dough up to peanut butter texture. We found that the broth from the pork and the whole chickens was easier to skim. While our broth from the legs and thighs (cooked separately) look really good just off the heat, when it was refrigerated it gelled. The other two types of broth were easy to skim after overnight refrigeration.

For the broth, you will need approximately 2 quarts. Mix one quart chicken broth and one quart pork broth together in a large bowl and warm in the microwave. Then pour into the masa a cup at a time as you mix.

You’ll want to mix up the dough with bare hands. It will be like playing in thick mud and you need to sort out all the balled-up bits of masa flour. That’s why it’s best to have a second pair of hands that can pour the broth as you squeeze and mix.

Make sure you have plenty of steamer space ahead of time. The recipes I found for tamales stated from 1-2 hours. Our tamales usually take about 3 ½-4 hours for steaming. You won’t have time to do several batches.

One large turkey fryer with a deep steamer basket should hold the tamales (bundle-style, not open-ended). Just place corn husks in between the layers. A super-sized turkey roaster with warming trays will hold about 46 tamales.

Add as much or as little salt as you wish. The same for chili powder. It will not affect the process of cooking tamales and you can adjust these to your own tastes. The same goes for garlic powder.

We use the double-string method of tying bundles. They look pretty and hold up well when stacking in a steamer. Bring the two sides together and fold them over together as tightly as you can. Bring one end up over the fold and tie it; the repeat by folding the opposite end and tying around the tamale. Takes a little longer and other methods.

As with any recipe, you’ll find so many variations on the recipe. Apply these techniques and you will be the most popular tamale-maker in the neighborhood!

This article was originally posted at http://www.ourhouseandgarden.com/OurKitchen/Mexican/Tamale-Tips.htm