By Alex Sosnowski | From AccuWeather.com | On Wednesday, February 6th, 2013

Two storms will merge quickly enough to bring colder air, heavy snow and increasing wind to New England. Some areas will be hit with an all-out blizzard and a couple of feet of snow.

The worst of the storm will hit late Friday and Friday night and will wind down Saturday morning. However, lingering effects from blowing and drifting snow, blocked roads and other travel delays are likely to linger into much of the weekend.

Numerous flight delays and cancellations are possible centered on New England, but these problems will be felt elsewhere across the nation.

Strong winds will not only cause white-out conditions but can result in massive drifts. 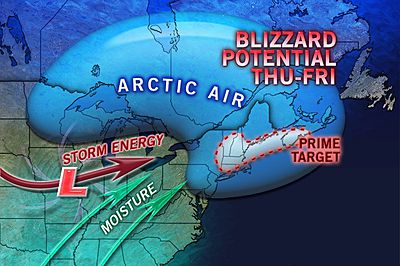 At the height of the storm, snow can fall at the rate of 2 to 4 inches per hour and may be accompanied by thunder and lightning.

The intense snowfall rate anticipated will is making the forecast especially challenging. A matter of an hour of intense snow versus 8 hours of intense snow will make the difference between a manageable few inches and a debilitating few feet of of snow. Nearby to the southeast of this intense snow, rain will be falling for a time. 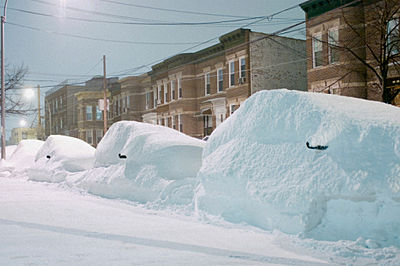 The storm has the potential to bury some areas of New England under a couple of feet of snow. This image was taken in Queens, N.Y., following the Jan. 23, 2005, blizzard. (Photos.com image and thumbnail.)

The hardest-hit areas are likely to include Hartford and Providence to Boston, Worcester, Concord, Portsmouth and Portland. 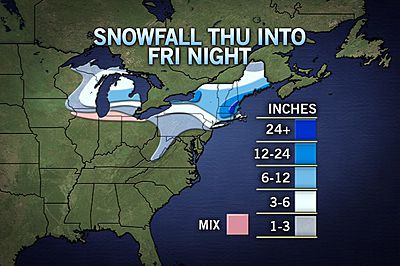 For a larger version of this map consult the AccuWeather.com Winter Weather Center.

Coastal flooding is another concern with this storm along the coast of eastern Massachusetts. The period of strong northeast winds will be occurring within a couple of days of the new moon and high astronomical tides.

Warm air will play a major role in the storm from New York City, Long Island and central New Jersey on south and west in the mid-Atlantic, resulting in rain during part or all of the storm, depending on location.

Only if the two storms sync up completely would heavy snow wrap around into New York City for an extended period, bringing a foot of the white stuff. Even so, without complete phasing of the storms, New York City and Long Island will get significant snow.

Meanwhile, a fresh injection of arctic air will fuel the blizzard over New England. The colder air will cause rain to change to snow on Cape Cod and along the South Coast, as well as cause wet snow to become more dry and powdery with time, making it subject to blowing and drifting in central and southern areas.

In northernmost New England from northern Maine to along the Canada border of New Hampshire, Vermont and northern upstate New New York, too much dry air feeding in from the north may limit snowfall or cut off the storm completely.

Snow from the Alberta Clipper part of the storm will still deliver enough snow to shovel and plow over much of upstate New York.

This article was originally posted at http://www.accuweather.com/en/weather-news/blizzard-to-bury-new-england-at-the-end-of-week/5673457