By Survivor Mike | From TheHomeForSurvival.com | On July 24th, 2012

Editor’s Note: The following article from Survivor Mike at The Home for Survival details strategies for community building before and after an SHTF event. While many preppers hesitate to bring any newcomers, especially neighbors they may not know, into their preparedness circle or even preparedness conversation, as Mike suggests, making friends and plans now may be our saving grace when things go sour. Operational Security is, of course, a key consideration, but so too is how you’ll handle a post-SHTF world, especially if it’s just you and your immediate family. While we’ve found it difficult to get neighbors or even family on board with preparedness planning, opening a dialogue and getting to know your neighbors is in our best interest. As we’ve learned from several post-collapse books and resources, communities and groups that band together often have a better chance of surviving than do road warriors or those who want to stand their ground alone when looters or gangs make a move on their homes and supplies. The alternatives to not building a community could and will likely be deadly, as rather than having friends and colleagues to lean on, they instead turn on you to gain access to your supplies. This is an important conversation to have, and Survivor Mike brings to light some key talking points. 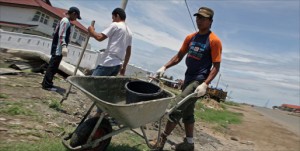 You’re living in your suburban home. CNN has just said that the stock market is dropping for the ninth day in a row and people are now racing to their banks to empty their accounts. Couple this with an unstable euro, an unstable Middle East, and a worldwide economic recession and you get the start of the shit hitting the fan. How does your neighborhood react to this? Who in your neighborhood do you trust?

Now take that a step further and imagine a state of civil unrest. Homes nearby are being looted and undesirables are now common in your neighborhood. You have a weapon, but the occupants of your home include you, your wife, and your two small children. You have a front door, a backdoor, and the garage door. How do you cover all three much less the first floor windows?

What I’ve described above is the situation you will be faced with when the SHTF. So, do you need to build a community of liked-minded folks when the shit hits the fan? I believe there are 10 reasons why building a community is key when it all goes down.

Being in a suburban area, I tend to worry about what will happen if looters run amok. I imagine when the SHTF, criminals will likely run in gangs. Those gangs will target individual homes for looting and potentially seek to oust the folks living there. They would target homes with a small number of occupants to make their raids that much easier.

So, to avoid being in their crosshairs, it would be optimal to be viewed as a large group. These criminals will have quite a few homes to choose from when things get tough and there is no sense in being an easy target. Remember, giving the perception of a large force is enough to deter those with bad intentions.

Continuing with the theme of a group, the more folks in that group, the more workers you have. Those additional sets of hands will be able to help garden, cook, pack supplies, gather water, and hunt for food. While you will have to feed and care for those extra bodies, the work you get from them should more than make up for it.

I would much rather have 5 people foraging for food and supplies versus one, as time will be of the essence.

Knowing you’ll have a community of preppers allows you to be proactive with planning now. You can request your neighbors start preparing by gathering supplies, preparing their homes and getting their financials in order. You can even go as far as planning the homes you will use for what purpose. By having those families focus on particular areas of prepping, you can be sure you will be best prepared when the trigger event happens.

At the very least, having your neighbors prepared will prevent them from being a liability when things go south. The last thing you need is a needy “friend” eating into your family’s supplies.

Having multiple homes in a community provides several advantages. Besides the tactical advantage of defending yourself, you acquire additional space for supplies, including areas to prep them.

Additionally, you provide the sense of normalcy for the folks in the community. Utilizing one house as a mess hall could be a possibility. Having a house serve as a medical facility is another. You would almost be able to build a town within the community. You cannot underestimate the importance of this helping with the psychology of the group trying to survive.

Your neighbors will have different supplies, different tools, and especially different skills. That alone is a huge asset when attempting to survive in uncertain times. However, the resources we don’t think about are the various contacts they may have.  They may have an uncle who owns 10 shotguns. A cousin that has an RV for sale. A friend with access to critical medical supplies.

Each neighbor will have their own network of contacts that may come in handy. Those contacts become even more valuable when things get very tough. You may even choose to join a larger group that your neighbors will have paved the way for by providing that connection.  We can be sure that we will need to be creative during difficult times.

You can never have enough supplies when chaos ensues.  Your neighbor may have several bundles of firewood he’s been collecting. Another may have a portable generator and a water filtration system. Another may have access to items very useful for bartering. Each one may have specialized tools to do things you do not.

With each person you bring into to the group, you add to your potential assets. While they will come with their own liabilities (need for food, shelter, etc), the assets and skills they bring should tip the scales in your favor.

When you are part of a group, you’re able to work in shifts. You are also able to continue working if one of the group gets ill. This is key when you are pressed for time in preparing supplies.

As mentioned earlier, you’ll also have people that excel in certain areas. This will allow you to accomplish things efficiently and effectively.  For example, my neighbor happens to be very good with electrical issues. If we needed to fashion something electrical, I would be very hard-pressed to come up with something effective. The time I spend working on that electrical solution would be time away from building defense capabilities, which are my strengths.  Not to mention, it would take me significantly longer.

When the SHTF, people will have a hard time adjusting. We will be going from a life where we have access to almost everything, to a life where getting the basic needs will be a challenge. While having our families will be a crutch that we rely on, having others to share the hardship with will certainly be a comfort.

As a man I know that hanging out with my male buddies is something I look forward to. Being able to vent to the other dads in the community and husbands will be a huge release (and take a bit of the burden off my wife). Don’t ignore the importance of human companionship when facing tough times.

Obviously, the additional folks will help defend the community. Again, the different skill sets will come into play here. Some neighbors may have experience in the military which will come in handy when defending your position.

I hear many preppers say they have so many weapons in their home that would be difficult for any looters or criminals to penetrate. However, at most you will be able to fire two guns (as you have two hands). I don’t know many people that could hit a target with two guns in your left and right hand.

Having and training additional marksmen would put you at a huge advantage. Think about it, as a criminal would you want to face an armed group or dad trying to defend his wife and two kids?

Having the ability to leave your compound without fear of losing it, is a distinct advantage. There will be times when you need to go out and either hunt for food, do some reconnaissance, or simply search for supplies.  Having able-bodied men guarding your community allows you (and others) to venture out to find information and plan further.

Remember, there will be no turning on CNN to find out what’s going on down the street.  You will need to be able to gather intelligence military style.

Clearly, having more mouths to feed and more variables in the equation will be a challenge.  However, a unified front when the desperate folks come calling is clearly the best long term approach.

This article was originally posted at: http://www.shtfplan.com/emergency-preparedness/10-reasons-why-building-a-community-is-key-when-the-shtf_07242012