By Michael Snyder | From BlacklistedNews.com | On Thursday, February 21st, 2013 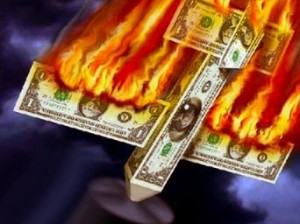 Is the U.S. economy about to experience a major downturn? Unfortunately, there are a whole bunch of signs that economic activity in the United States is really slowing down right now. Freight volumes and freight expenditures are way down, consumer confidence has declined sharply, major retail chains all over America are closing hundreds of stores, and the “sequester” threatens to give the American people their first significant opportunity to experience what “austerity” tastes like. Gas prices are going up rapidly, corporate insiders are dumping massive amounts of stock and there are high profile corporate bankruptcies in the news almost every single day now. In many ways, what we are going through right now feels very similar to 2008 before the crash happened. Back then the warning signs of economic trouble were very obvious, but our politicians and the mainstream media insisted that everything was just fine, and the stock market was very much detached from reality. When the stock market did finally catch up with reality, it happened very, very rapidly. Sadly, most people do not appear to have learned any lessons from the crisis of 2008. Americans continue to rack up staggering amounts of debt, and Wall Street is more reckless than ever. As a society, we seem to have concluded that 2008 was just a temporary malfunction rather than an indication that our entire system was fundamentally flawed. In the end, we will pay a great price for our overconfidence and our recklessness.

Hopefully the economy will remain stable for as long as possible, but right now things do not look particularly promising.

The following are 20 signs that the U.S. economy is heading for big trouble in the months ahead…

#1 Freight shipment volumes have hit their lowest level in two years, and freight expenditures have gone negative for the first time since the last recession.

#2 The average price of a gallon of gasoline has risen by more than 50 cents over the past two months. This is making things tougher on our economy, because nearly every form of economic activity involves moving people or goods around.

#3 Reader’s Digest, once one of the most popular magazines in the world, has filed for bankruptcy.

#4 Atlantic City’s newest casino, Revel, has just filed for bankruptcy. It had been hoped that Revel would help lead a turnaround for Atlantic City.

#5 A state-appointed review board has determined that there is “no satisfactory plan” to solve Detroit’s financial emergency, and many believe that bankruptcy is imminent. If Detroit does declare bankruptcy, it will be the largest municipal bankruptcy in U.S. history.

#6 David Gallagher, the CEO of Town Sports International, recently said that his company is struggling right now because consumers simply do not have as much disposable income anymore…

“As we moved into January membership trends were tracking to expectations in the first half of the month, but fell off track and did not meet our expectations in the second half of the month. We believe the driver of this was the rapid decline in consumer sentiment that has been reported and is connected to the reduction in net pay consumers earn given the changes in tax rates that went into effect in January.”

#7 According to the Conference Board, consumer confidence in the U.S. has hit its lowest level in more than a year.

#8 Sales of the Apple iPhone have been slower than projected, and as a result Chinese manufacturing giant FoxConn has instituted a hiring freeze. The following is from a CNET report that was posted on Wednesday…

The Financial Times noted that it was the first time since a 2009 downturn that the company opted to halt hiring in all of its facilities across the country. The publication talked to multiple recruiters.

The actions taken by Foxconn fuel the concern over the perceived weakened demand for the iPhone 5 and slumping sentiment around Apple in general, with production activity a leading indicator of interest in the product.

#9 In 2012, global cell phone sales posted their first decline since the end of the last recession.

#10 We appear to be in the midst of a “retail apocalypse”. It is being projected that Sears, J.C. Penney, Best Buy and RadioShack will also close hundreds of stores by the end of 2013.

#11 An internal memo authored by a Wal-Mart executive that was recently leaked to the press said that February sales were a “total disaster” and that the beginning of February was the “worst start to a month I have seen in my ~7 years with the company.”

#12 If Congress does not do anything and “sequestration” goes into effect on March 1st, the Pentagon says that approximately 800,000 civilian employees will be facing mandatory furloughs.

#13 Barack Obama is admitting that the “sequester” could have a crippling impact on the U.S. economy. The following is from a recent CNBC article…

Obama cautioned that if the $85 billion in immediate cuts — known as the sequester — occur, the full range of government would feel the effects. Among those he listed: furloughed FBI agents, reductions in spending for communities to pay police and fire personnel and teachers, and decreased ability to respond to threats around the world.

He said the consequences would be felt across the economy.

“People will lose their jobs,” he said. “The unemployment rate might tick up again.”

#14 If the “sequester” is allowed to go into effect, the CBO is projecting that it will cause U.S. GDP growth to go down by at least 0.6 percent and that it will “reduce job growth by 750,000 jobs”.

#16 U.S. GDP actually contracted at an annual rate of 0.1 percent during the fourth quarter of 2012. This was the first GDP contraction that the official numbers have shown in more than three years.

#17 For the entire year of 2012, U.S. GDP growth was only about 1.5 percent. According to Art Cashin, every time GDP growth has fallen this low for an entire year, the U.S. economy has always ended up going into a recession.

#18 The global economy overall is really starting to slow down…

The world’s richest countries saw their economies contract for the first time in almost four years during the final three months of 2012, the Organisation for Economic Co-operation and Development said.

The Paris-based thinktank said gross domestic product across its 34 member states fell by 0.2% – breaking a period of rising activity stretching back to a 2.3% slump in output in the first quarter of 2009.

All the major economies of the OECD – the US, Japan, Germany, France, Italy and the UK – have already reported falls in output at the end of 2012, with the thinktank noting that the steepest declines had been seen in the European Union, where GDP fell by 0.5%. Canada is the only member of the G7 currently on course to register an increase in national output.

#19 Corporate insiders are dumping enormous amounts of stock right now. Do they know something that we don’t?

#20 Even some of the biggest names on Wall Street are warning that we are heading for an economic collapse. For example, Seth Klarman, one of the most respected investors on Wall Street, said in his year-end letter that the collapse of the U.S. financial system could happen at any time…

“Investing today may well be harder than it has been at any time in our three decades of existence,” writes Seth Klarman in his year-end letter. The Fed’s “relentless interventions and manipulations” have left few purchase targets for Baupost, he laments. “(The) underpinnings of our economy and financial system are so precarious that the un-abating risks of collapse dwarf all other factors.”

So what do you think is going to happen to the U.S. economy in the months ahead?

This article was originally posted at http://www.blacklistednews.com/20_Signs_That_The_U.S._Economy_Is_Heading_For_Big_Trouble_In_The_Months_Ahead/24357/0/0/0/Y/M.html