Warning: Use of undefined constant REQUEST_URI - assumed 'REQUEST_URI' (this will throw an Error in a future version of PHP) in /homepages/5/d699574795/htdocs/radicalsurvivalism-com/web/wp-content/themes/editorialmag/functions.php on line 73
 Keeping Tabs On The North Korean Satellite – Radical Survivalism
Skip to content
Current Events Reference 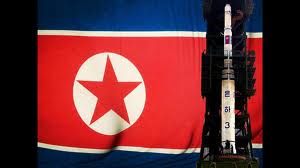 KWANGMYONGSONG 3 (KMS 3-2) is supposedly a North Korean Earth observation satellite, which according to the DPRK is designed for weather forecast purposes, and whose launch is widely portrayed in the West to be a veiled ballistic missile test. Some believe the satellite includes a secondary payload consisting of an Electromagnetic Pulse device (EMP) which is intended to be launched and exploded above a target nation, rendering the vast majority of  electrical systems and devices within the blast radius permanently destroyed. Both Russia and China have been thought to have aided in designing such a device along with North Korean scientists and their military.