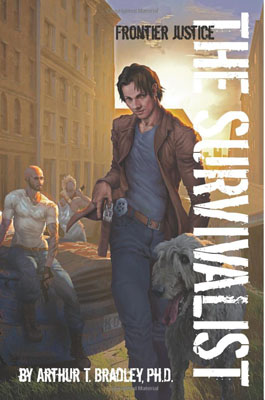 The Superpox-99 virus has wiped out nearly the entire human race. Governments have collapsed. Cities have become graveyards filled with unspeakable horror. People have resorted to scavenging from the dead, or taking from the living. The entire industrialized world has become a wasteland of abandoned cars, decaying bodies, and feral animals.

To stay alive, U.S. Deputy Marshal Mason Raines must forage for food, water, and gasoline while outgunning those who seek to take advantage of the apocalyptic anarchy. Together with his giant Irish wolfhound, Bowie, he aligns with survivors of the town of Boone in a life and death struggle against a gang of violent criminals. With each deadly encounter, Mason is forced to accept his place as one of the nation’s few remaining lawmen. In a world now populated by escaped convicts, paranoid mutants, and government hit squads, his only hope to save the townspeople is to enforce his own brand of frontier justice.

Halfway across the country, a killer is released from prison. With hopes set on a fresh start, he rescues a young girl desperate to get home. As they travel across the wasteland that once was the United States, they must call upon every bit of strength and courage to survive not only the horrors of the new world but also a violent government agenda.

Dr. Arthur Bradley holds a doctorate in engineering from Auburn University and currently works for NASA. Having lived all across the United States, he writes from personal experience about preparing for a wide variety of disasters, including earthquakes, tornadoes, hurricanes, floods, house fires, massive snowstorms, electromagnetic pulse attacks, and solar storms. He has been featured in the New York Times, Money magazine, the Toronto Sun, Popular Mechanics, Men’s Journal, and numerous radio shows.

Dr Bradley subscribes to the philosophy that preparedness should always be motivated by love and concern, never by fear and paranoia. His practical approach to family preparedness has received widespread praise from individuals, emergency preparedness groups, and religious organizations. He is the author of several highly acclaimed books on disaster preparedness, including the “Handbook to Practical Disaster Preparedness for the Family,” “Disaster Preparedness for EMP Attacks and Solar Storms,” the “Prepper’s Instruction Manual,” and “The Survivalist (Frontier Justice).” He conducts free seminars around the world, teaching individuals and families how to establish effective disaster preparedness plans.