Own the Night: Tactical Training for Citizens Vol I 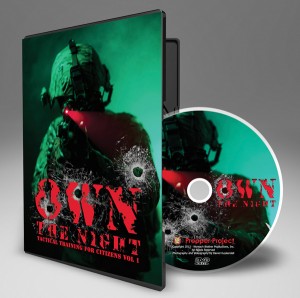 From the back cover:

“People from all over the country are gathering together to combine their vast array of unique talents to prepare for civil unrest. Meet three of them.

Dave Womach is a world-class illusionist who has completed multiple world tours, and starred in shows in more than 20 countries.He has headlined on many major cruise lines, and won multiple national and international awards including the Pacific Rim Professional Stage Championship and the Masters of Magic Award. His illusions have been seen on television specials everywhere from the United States to Bangladesh & China. Most recently, he stared in his own show with Ringling Brothers and Barnum and Bailey on a two-year tour. Now he combines his knowledge of misdirection, with the dedication of an artist, all while training for the big fight.

Chet Womach dropped out of college and the highly competitive world of division-one baseball, to make his first million from behind a computer and avoid the corporate conundrum. He immediately founded several private LLCs, and hit the ground running to secure his fortune before the economic collapse. His athletic background set the tone for his work-ethic and drive, as he activated a plan to build a permaculture food forest which will soon feed his neighbors and family. Between running his businesses and tending to his farm and family, he still makes time to train in preparation to protect his neighborhood.”

This is an excellent video for those seeking information and visual demonstration of  the correct methods of employing night vision gear during low-light tactical operations. Useful night time training drills that the viewer can replicate are the core of this particular video. The “VOL I” descriptor suggests this is the first of a series of training videos, and more of the series are yet to come.

The DVD is available directly from ThePrepperProject.com for $49.95. Shipping within the US is free.