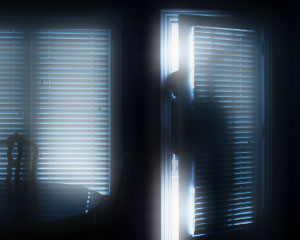 I am so often disheartened as I see in the news the numbers of people, especially women and children, who die by violence in their own homes. A particularly horrible home invasion/rape/murder* of a mother and her two daughters in nearby Cheshire, CT shocked me and the world. This type of story is all too common these days, every one a tragedy. Yet, I can’t help wondering if the situation might play out differently if the family had a gun for defense in their home.

A story currently in the news is sparking a lot of interest, and, hopefully a lot of thought. An 18 year old Oklahoma mother, alone with her baby, having just buried her husband, heard intruders trying to gain entry to her home. One was holding a twelve inch knife. It is hard to imagine how Sarah McKinley had the presence of mind that she did. She moved a sofa in front of the locked door. She grabbed a shotgun and her baby and retreated to the bedroom. Making sure her baby was safe in the crib, she gave him a bottle. She then retrieved a pistol and called 911.

She explained her situation to the 911 dispatcher and asked if it would be OK to shoot if the men got into her home. I give kudos to the dispatcher who told her she could do what she had to do to protect her baby. Clearly, police were dispatched to her home. But, they had not arrived when the criminals broke through and entered her home. This brave teenager shot and killed the first attacker. The other man fled, but was captured by police. In the best demonstration of justice I’ve seen in a long time, the accomplice was arrested for 1st degree murder for the death of his accomplice during the joint commission of a felony.

Young Sarah is an inspirational example of mother’s instinct. The most dangerous of animals are mothers protecting their young. Humans are no different, except for the weapons we use. While mama lions have teeth & claws, along with massive size and strength, human mothers are often nearly as defenseless as the bird feigning a broken wing to distract predators from her nest. Meanwhile, human predators have all sorts of weapons at their disposal. They are often armed with lethal weapons such as guns and knives. The only way to even the odds is for the prey to use all the tools at her disposal, as this mother did.

Fortunately, Sarah McKinley had the tools and knew how to use them. How differently this story would have ended if she had not. At some point, someone in Sarah’s life taught her how to use firearms and made sure they were available. A very important point since 18 year olds in most jurisdictions can’t buy or carry firearms. Here in Connecticut, few children are taught to use firearms. Those who are taught are usually boys. Anti-gun liberals have convinced many people here that guns are bad, especially in homes with children. Yet, it is a home with helpless innocents, limited in ability to flee, that needs protection the most.

I rejoice each time I see women, especially young women, at the firing range. These are women who will have the ability to protect themselves and their families. So, parents, be certain to teach your daughters as well as your sons. Women take advantage of every tool you can to protect yourselves and those who depend upon you. And, Sarah McKinley, you are a true American hero.

If you would like to make a contribution to help this young widowed mother a fund has been established:

1 thought on “Teach Your Daughters Well”