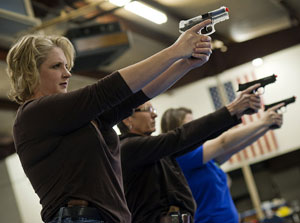 Although female gun owners are increasing in number, statistics still show that women are more likely to object to firearms in the home. Women with children are more likely than those without children to fear having them. The anti-gun groups have worked hard to instill this fear in the public. They heavily publicize the tragic accidents caused by children playing with firearms to prey on the worst fears a parent has.

Guns are obviously dangerous by design. So are automobiles, the leading cause of accidental death for children in the U.S. Also highly dangerous are lawnmowers, chainsaws, kitchen knives and numerous other tools found around the house and yard. Kids are abused by adults, bitten by dogs, strangled by pet snakes. Children die or are injured by all of these.

A firearm is a tool, nothing more. In and of itself, it will not jump up and kill someone. Parents, in my opinion, have two duties when it comes to guns. First, and foremost, adults must be certain that a firearm never ever comes into the hand of an unsupervised child. Even if you are not a parent, guns must be secured so that no child, including visitors, can ever get their little hands on them. Carrying your weapon on your person while it is not locked away will accomplish this.

The second responsibility is one that the anti-gun people should also heed. It is that all parents must educate children about firearm safety. In the simplest form, it is that if a child sees a gun unattended by an adult, they must inform an adult immediately and NOT TOUCH IT! Whether you are for or against guns, you must teach your child what to do when they are away from you and see a gun, whether found outside or in a playmate’s home.

If you own firearms, teach your child safety at age appropriate levels. I was raised in a home with guns. I don’t recall ever not knowing the adage that all guns are essentially loaded all the time. This is vital for parents to follow and impress upon their children. When they reach the age to use toy guns, teach them the difference between a real gun and a water gun, nerf gun, paintball gun, etc. As a child we treated BB guns, pellet guns and air guns as real weapons as they can cause serious injuries or occasionally, death.

If all parents educated their children about guns, even if they don’t think the children will encounter one, so much tragedy could be avoided. Just as we teach our kids to stay out of traffic, not play with knives and not pet strange dogs, we have a duty to teach them about firearms. Education is how tragedies are avoided.

The decision to own a gun in a home with children is a very personal one. It is a decision that must be made by every family for themselves based upon their own circumstances. Having a gun is not necessarily the right decision for everyone. For some, a long gun may be preferable to a handgun. Whatever your choice, it is yours alone to make.

In my childhood, we had guns. We went hunting and target shooting. None of us or our playmates was ever injured because our parents practiced and taught good safety. The good safety habits I learned as a child have stayed with me for life. Having been introduced as a child, I respect, but do not fear guns.

For my own family, there was a point where I could not, in good conscience, keep a weapon of any kind in my home. My youngest child had severe early onset bipolar disorder. I chose to keep her at home and do the best I could. However, she had no regard for her own safety at all. She would use anything as a weapon. She could break into practically anything in a flash. I just could not be sure that I could secure a gun from her and have it in any way accessible to me if needed. I also got rid of everything that could be used as a weapon, even kitchen knives. I had one knife I kept well hidden and she still got it a few times. I lived in a rural, low crime area and, at that point in life, a gun would have been more of a risk than a benefit. I also hired a lawn service and kept the car key on me all the time. Everything posed a danger during that time.

So, I fully support a family’s right to choose what is best for their circumstances. I just hope to see more people make their choice because they are educated about firearms and have weighed the risks and benefits for themselves. What I don’t like to see is the fear and ignorance that cause people to not only refuse to have guns, but, to fail to even teach their children how to be safe around one. The best advice I can give is to educate yourself first, then educate your children from a position of strength and knowledge.