Warning: Use of undefined constant REQUEST_URI - assumed 'REQUEST_URI' (this will throw an Error in a future version of PHP) in /homepages/5/d699574795/htdocs/radicalsurvivalism-com/web/wp-content/themes/editorialmag/functions.php on line 73
 This Is What An Economic Depression Looks Like In The 21st Century – Radical Survivalism
Skip to content
Current Events Economics 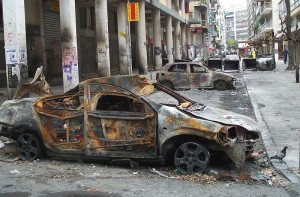 Do you want to see what a 21st century economic depression looks like?  Just look at Greece.  Once upon a time, the Greek economy was thriving, the Greek government was borrowing money like there was no tomorrow and Greek citizens were thoroughly enjoying the bubble of false prosperity that all that debt created.  Those that warned that Greece was headed for a financial collapse were laughed at and were called “doom and gloomers”.  Well, nobody is laughing now.  You see, the truth is that debt is a very cruel master.  Greeks were able to live way beyond their means for many, many years but eventually a day of reckoning arrived.  At this point, the Greek economy has been in a recession for five years in a row, and the economic crisis in that country is rapidly getting even worse.  It was just recently announced that the overall rate of unemployment in Greece has soared above 20 percent and the youth unemployment rate has risen to an astounding 48 percent.  One out of every five retail stores has been shut down and parents are literally abandoning children in the streets.  The frightening thing is that this is just the beginning.  Things are going to get a lot worse in Greece.  And in case you haven’t been paying attention, these kinds of conditions are coming to the United States as well.  We are heading down the exact same road as Greece went down, and the economic pain that this country is eventually going to suffer is going to be beyond anything that most Americans would dare to imagine.

All debt spirals eventually come to an end.  For years, Greece borrowed huge amounts of very cheap money, but there came a point when the debt became absolutely strangling and the rest of the world refused to lend the Greek government money at such cheap rates anymore.

Greece would have defaulted long before now if the EU and the IMF had not stepped in to bail them out.  But along with those bailouts came strings.  The EU and the IMF insisted that the Greek government cut spending and raise taxes.

Even after all of the spending cuts and all of the tax increases that we have seen, the debt to GDP ratio in Greece is still higher than it was before the crisis began.  Today, the Greek national debt is sitting at 142 percent of GDP.

Now the EU and the IMF are demanding even more austerity measures before they will release any more bailout money.

Needless to say, the Greek people are pretty much exasperated by all of this.  They created this mess by going into so much debt, but they certainly don’t like the solutions that are being imposed upon them.

Protesters in Greece are absolutely outraged that the EU and the IMF are now demanding a 22 percent reduction in the minimum wage.

Most families in Greece are just barely surviving at this point.  Unfortunately, Greece is probably looking at depression conditions for many years to come.

Over the past three years, the size of the Greek economy has shrunk by 16 percent.

In 2012, it is being projected that the Greek economy will shrink by another 5 percent.

Sadly, that projection is probably way too optimistic.

Over the past couple of months, it has been like someone has pulled the rug out from under the Greek economy.  Just check out the following numbers from an article in the Telegraph by Ambrose Evans-Pritchard….

Another normal day at the Hellenic Statistical Authority.

Greece‘s manufacturing output contracted by 15.5pc in December from a year earlier.

Industrial output fell 11.3pc, compared to minus 7.8pc in November.

Unemployment jumped to 20.9pc in November, up from 18.2pc a month earlier.

I have little further to add. This is what a death spiral looks like.

Can you imagine unemployment going up by 2.7 percent in one month?

This is what a 21st century economic depression looks like.

And needless to say, civil unrest is rampant in Greece.

The following is how a USA Today article described some of the protests that we saw in Greece this week….

Scores of youths, in hoods and gas masks, used sledge hammers to smash up marble paving stones in Athens’ main Syntagma Square before hurling the rubble at riot police.

The country’s two biggest labor unions stopped railway, ferry and public transport schedules, and hospitals worked on skeleton staff while most public services were disrupted. Unions were planning protests in Athens and other cities around midday.

Greek citizens are exasperated by the endless rounds of austerity that are being imposed upon them.  They wonder how far all of this is going to go.

How much higher can taxes go in Greece?  Greece already has tax rates that are among the highest in Europe….

Greece has the third highest rate of VAT in Europe, second highest gas/petrol tax, third highest tax on social insurance contributions, fifth highest VAT on alcohol, highest property tax and one of the worst corporate tax rates, without the quality of living or competitiveness to match.

How much farther can government pay be cut?  Greek civil servants have had their incomes slashed by about 40 percent since 2010.

How would you feel if your pay was reduced by 40 percent?

Large numbers of Greeks are rapidly reaching the end of their ropes.  The following is from a recent article in the Independent….

“People are scared and haven’t really realised what’s happening yet,” George Pantsios, an electrician for the country’s public power corporation, said. He has only been receiving half of his €850 monthly wage since August. “But once we all lose our jobs and can’t feed our kids, that’s when it’ll go boom and we’ll turn into Tahrir Square.”

Instead of turning violent, others are simply giving in to despair.  According to the Daily Mail, large numbers of Greek children are being abandoned because their parents simply cannot afford to take care of them anymore.  The note that one mother left with her little toddler was absolutely heartbreaking….

One mother, it said, ran away after handing over her two-year-old daughter Natasha.

Four-year-old Anna was found by a teacher clutching a note that read: ‘I will not be coming to pick up Anna today because I cannot afford to look after her. Please take good care of her. Sorry.’

Sadly, there are an increasing number of Greeks that are giving up on life entirely.  The number of suicides in Greece rose by 40 percent during just one recent 12 month time period.

But we haven’t even seen the worst in Greece yet.  The worst is still yet to come.

According to one recent poll, about 90 percent all of Greeks are unhappy with the interim government led by Prime Minister Lucas Papademos.

This week, that government has started to fall apart.  Over just the past few days, 6 members of the 48-member government cabinet have resigned.  Not only is there real doubt if the new austerity measures will be approved, there is very real doubt if this government will be able to hold together much longer.

Frustration with the EU and the IMF has reached a fever pitch in Greece.  Just check out what Reuters is reporting….

In a letter obtained by Reuters on Friday, the Federation of Greek Police accused the officials of “…blackmail, covertly abolishing or eroding democracy and national sovereignty” and said one target of its warrants would be the IMF’s top official for Greece, Poul Thomsen.

So what is going to happen next in Greece?

The truth is that nobody knows.

But whatever kind of “deals” are reached, the reality is that nothing is going to keep Greece from continuing to experience depression-like conditions for quite some time.

Unfortunately, Greece is not an isolated case.

Portugal, Ireland, Italy and Spain are all going down the same path and Europe does not have enough money to bail all of them out.

To get an idea of how much money it would take to bail out the financially troubled nations of Europe, just check out this infographic that was recently posted on ZeroHedge.

A day of reckoning is coming for the United States as well.  As CNBC recently noted, the U.S. debt problem is far worse than the European debt problem is.

That is why I have written over and over about the U.S. national debt and about how the U.S. government is spending too much money.

Right now, the U.S. government is still able to borrow gigantic mountains of very cheap money and is spending money as if tomorrow will never come.

Well, just like we saw in Greece, when debt gets out of control a day of great pain eventually arrives.

What we are watching unfold in Greece right now is coming to America.

You better get ready.

The original article can be found at: http://theeconomiccollapseblog.com/archives/this-is-what-an-economic-depression-looks-like-in-the-21st-century