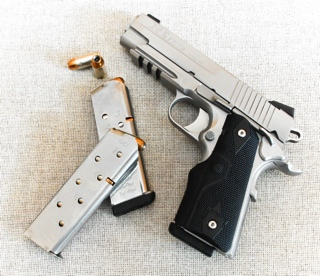 There have been many stories in the news recently involving the use of a firearm by civilians. Some have resulted in praise of knowledgeable citizens employing their firearms in emergency situations. Others have resulted in arrests of the citizens for various firearm-related crimes, thus sparking outrage among other pro-gun folks. Just as it is difficult to  believe that all of these arrests were necessarily wrong, it is equally difficult to think  that all of those praised in the news for their actions were fully in the right. Let us examine some of the legalities and practical aspects of using a firearm in self defense.

First and foremost, a private citizen who legally owns and carries a firearm is allowed to use it in defense of himself or another person where there is reason to believe there is imminent risk of death or grave bodily injury. At all times, the firearm operator is expected to consider the possible risks to other innocent people from missed shots, over-penetration and ricochets. In a high pressure situation such as an armed robbery, this information has to be evaluated and processed instantaneously. It is because of these risks that discharging a weapon in a residential area is illegal unless dire circumstances require it. (Check your local firearms laws.) The lawful gun owning citizen is not a police officer. It is not our job to prevent crime, apprehend suspects, nor hold them for police. We neither have an obligation nor a right to defend physical property with lethal force.

An article of  concern was in regards to the first Wisconsin resident to use a gun since the new concealed carry law took effect in that state. The local media hailed this man as heroic and the incident was treated as a lawful shooting. This may have not been considered lawful in every jurisdiction. The man was inside a supermarket as armed robbers entered waving guns around. There had apparently been a string of such robberies. However, the robbers had not shot anyone or pointed a gun at them. The gunmen were relying on the intimidation factor of waving their guns around. In other jurisdictions, the fact that the guns were not being pointed at anyone thereby posing immediate threat may have counted against the armed citizen. What is troubling in this situation is that there were several other people in the store who were at more risk from shots being fired so close by and the possibility of an actual gunfight if the robbers returned fire. Fortunately, the cowardly criminals did not fight back and no innocent bystanders were harmed. It is possible that while under the stress of the situation the armed citizen may not have given enough thought to the potentially negative consequences of his actions.

The 2011 Tuscon shooting that injured Representative Gabrielle Giffords has been fodder for the anti-gun lobby. One rather ridiculous point that was brought up was that a man in the crowd was lawfully carrying a handgun but did not act. The argument on the anti-gun side is that we “allow” people to carry guns for situations like this one, and this incident proves lawful guns are useless. It is a waste of time to engage in a rant about “allowing” gun ownership and carry because it is our right as citizens. The rest of the reasoning cited by the anti-gun proponents is just as flawed. The responsible citizen carrying a firearm was not close enough to be sure he could hit only the shooter rather than hurting more innocents in the crowd. He was also smart enough to know that when the police arrive at the scene of a shooting like this, anyone with a gun may be presumed to be the perpetrator. It was unfortunate that there was nothing the bystander could do in this situation, but it appears he made the responsible choice.

Recently, a store owner was charged in the death of an armed robber. Two armed men held-up the man at gunpoint. He fired at them, hitting one and bringing him down. Gun in hand, he chased the other robber down the street. Unsuccessful at catching the bad guy, the man returned to the store where the first robber lay on the floor, wounded but alive. The owner then shot him again, killing him. Police arrested the store owner for this killing. Why? Because he knew that he had stopped the threat and incapacitated the robber. Had he kept shooting initially, he probably would not have been charged even if he kept shooting after an incapacitating shot was fired. Having left and then returning to find the robber was too injured to move, the store owner was no longer defending himself from a threat. We all should know that chasing a criminal down the street with your gun drawn is illegal. That of course, is the least of the store owner’s problems now. He may or may not find some sympathy from a jury on this.

Another story involved a man in New Hampshire who discovered his home had been robbed at which point he witnessed the burglar climbing out of his neighbor’s window. The gentleman then confronted the burglar. He fired a warning shot into the ground to let the criminal know he meant business. He then held the robber at gunpoint until police arrived. There was great outrage that the good citizen was arrested for reckless discharge of a firearm in a residential neighborhood. The charges have subsequently been dropped by the prosecutor after a flurry of outraged calls and emails. This appears to be a fair outcome, especially as no one was injured. The man who stopped the burglar also happened to be a senior citizen which gave the victim good reason to believe he needed to make a point. This should serve as a reminder to all of us that we should not be firing warning shots. If there is such imminent risk and fear of bodily harm that we are entitled to use a gun, there is no reason for a warning of any kind, more specifically a warning shot.

It is possible Castle Doctrine laws are misunderstood by some to mean that you can defend your property from burglars with your gun. This is not really the meaning or intent of the legislation. These laws are common sense rules of law against those in the legal system who on occasion argued that a victim always has a duty to retreat from a threat rather than stand and confront it, even if that meant jumping out the window of their own home. These laws, which now exist in many states, give the legal presumption that if someone unlawfully enters your home with you in it, they do intend bodily harm to you. It seems like simple common sense that if you wake up in the dark to find a stranger in your home that you would believe he has bad intentions. There are still many places where the presumption of innocence for criminals trumps the right of a person to be secure from threats of harm or death in their own home. It is not, in legal terms, that Castle Doctrine allows you to defend your actual property when you encounter a criminal in your home. It is rather, the legal right that you should be able to be safe from assault or murder in your own home. It is this same presumption that a criminal must be planning an act of violence if he breaks into an occupied home that is behind new tougher laws that differentiate home invasion from simple burglary to that of a vacant residence.

We must remember at all times that, as lawfully armed citizens, we are not police. We may suffer severe repercussions if we use a firearm to defend property or to prevent property crime. We do not warn or threaten use of lethal force. If the situation is sufficiently dangerous that a citizen may defend himself with lethal force, the time for warnings is past. Know the laws in your jurisdiction. Also, know the practices of local law enforcement regarding firearms. Occasionally, the normal practices and procedures are not what you might expect when reading the law. While it is true that you will likely not face prosecution if you were arrested under these circumstances, most would not have the time, money or inclination to go that route.  You would be well advised that when you see these stories in the news that you carefully consider what you would do in the same situation. You can run scenarios in your head, but sometimes real life is more complicated than what our imagination can conjure. If you use your firearm responsibly, legally and appropriately, you should have no fears of prosecution. The time to think it through is before it happens.

DISCLAIMER: The views expressed in this article are the thoughts and opinions of the author. With respect to firearms, in all cases, it is the reader’s responsibility to know, understand, and follow all applicable laws regarding the ownership and use of firearms. The author, nor Radical Survivalism Webzine will be liable for the information contained in this article.