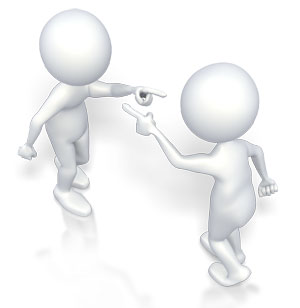 Responsibility is a value which has been severely eroded in modern life. Our society has moved from the ideals of self determination that settlers treasured to an abdication of all pretense of responsibility for the self. When something bad happens to us, we blame everyone but ourselves. Struck by natural disaster? Blame the government for sending too little help, too late. Injured? Sue somebody. Sick? Blame the doctor. Kids cannot read? Blame the teachers. Took a pill and had side effects? Sue the manufacturer.

When an area in Connecticut was hit by the freak October snowstorm in 2011, people blamed the electric company for leaving them without power for up to two weeks. Who did the electric company blame? The weathermen. The CEO of our utility actually said on television that the fault lay with the weathermen who didn’t warn him. Of course, everyone else knew the storm was coming days ahead with wet, heavy snow and high winds. The governor declared a state of emergency before the first snowflake fell. Unfortunately, no one “told” the utility to prepare. Of course the other political party blamed the governor. As you all know, politicians do control the weather. Most residents had at least minimal preparations. But, there was still an outpouring of blame and anger at everyone from the electric company to the fire department.

Preppers know not to expect help from the government, the utility companies or for that matter, anyone else. We recognize that even with good intentions, help won’t necessarily arrive when we need it. We see our neighborhoods becoming more crime-ridden and realize that there is no way for police to be everywhere, at all times, to prevent crime. Our faith in our government diminishes everyday as we see corrupt and power hungry leaders stealing our freedoms. We see the direction our world is headed and conclude that the situation is likely to get worse.

No matter what, there will always be crisis or disaster in one form or another. Rather than leaving our fate and our loved ones’ fates in the unreliable hands of others, preppers choose to take responsibility for ourselves. This was the natural order of human life until the most recent decades. Independence and self reliance were simply fact for previous generations. We choose now to take back those values that made modern civilization possible. We don’t take for granted that the comforts we are accustomed to will always be there. Electricity, fuel, automobiles, computers, cell phones and more have become things people believe they cannot live without. We know that people can survive without these comforts as they did for centuries.

Preppers look at their lives and their surroundings differently than mainstream society. We prepare for short term and for long term loss of the trappings of modern civilization. We take responsibility for our own safety, knowing that even in the best of times, the police aren’t always able to help us in time. And, these are certainly not the best of times. We make certain that we will have food, water, and shelter for ourselves even if disaster strikes. These are considerations no sane person would have thought odd a century ago.

We choose to break free of the cycle of dependence on systems that can fail. Taking the credit or the blame for the consequences of our own actions is not revolutionary thinking. In a world where government has run amok and the people have become dependent and complacent, this ideal does set preppers apart from the rest. Anyone can be prepared. The first step is taking personal responsibility.

1 thought on “Prepping: It’s About Responsibility”