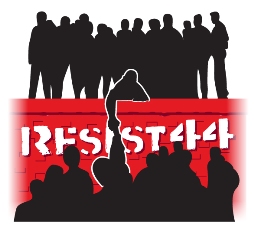 Resistance 44 is the conservatives counter-movement to Generation 44. “…young minds that value freedom, liberty and American Exceptionalism. We are unapologetic freedom loving activists who see Obama as a threat to freedom…”

The Resist44.com website puts forth a four-part plan to achieve their goals:

1. Resist 44 will dominate the social media conversation by creating trending topics on Twitter, friending thousands of Facebook fans, and using every social media platform available to promote the goal of Resistance 44.

3. Resist 44 will mobilize our nationwide army of activists comprised of accurate and dependable researchers, writers, public speakers, and podcasts who will share goodwill and demonstrate the power of millions of people making a positive impact on the future.

4. We will debunk the stereotypes that progressives place on young conservatives. We will accomplish more without the shackles of government interference and will prove it through concentrated and focused action to change the “it’s always been this way” culture.

Resistance 44 is a nationwide network of young activists committed to facilitating a radical culture shift from a generation indoctrinated to embrace mob mentality to informed, politically active individual thinkers.

Resistance 44 will make history and fight progressivism at the polls by generating the largest turnout of informed young voters. For far too long, we have been spoon-fed the progressive culture from the likes of Hollywood elites and sensationalized news pundits. We WILL DOMINATE the narrative. We WILL have a say in our future. WE ARE RESISTANCE 44.

Resistance 44 was founded with the mission to create the largest standing force of young conservative activists in America, dedicated to encouraging independence over government dependence, countering the progressive agenda and having a say in the future we will inherit.