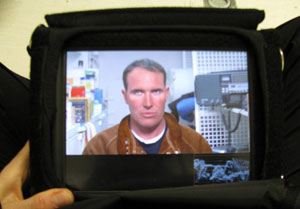 Mester, White, and Cook…these were the preppers du jour for March 6, 2012 on National Geographic’s “Doomsday Preppers.” They weren’t on a who’s–who list of who to emulate prior to the show. But these men’s lives are such to really give one not only inspiration, but hope. Gaining this kind of prepping notoriety not only takes time, it also requires money, a lot of it. This capacity of readiness is something that most of us will only dream about.

Mester is involved in many hours of his life with spending quality family time. Maybe it isn’t the type of quality time that some other husbands or dads would enjoy or prefer, but nonetheless, he still actively engages his family. White expressed wanting to protect and grow seeds for his community. The thought may cross one’s mind that he is waiting for the day that he gets to don the cape to be one who saves the day, if only in his own mind. Time will tell. Cook was the one prepper participant that garnered the least amount of comments, possibly because his take on preparedness was simply stunning. Most of those watching Doomsday Preppers will most likely not make $300,000.00 in their lifetime, let alone spending it on preps.

What was most remarkable about #preppers Twitter-verse last night and early on into the morning here in Eastern Standard Time, is that television viewers still believe what they see on television. Not to say that National Geographic is not being realistic in their portrayals of preppers, although post taping interviews of former participants do reveal that to a certain extent. The point being is that preppers portrayed on this show come across as fringe eccentrics of the worst kind. This is evidenced by comments running rampant on the “#Preppers” discussion hash tag on twitter.

Some tweets that were posted last night during the Doomsday Preppers broadcast included:

We here at Radical Survivalism appreciate National Geographic for giving us the opportunity to reach out to people about preparedness. However, if the interest on NatGeo’s part is to truly educate and inspire, rather than to simply create ratings, a suggestion would be to bring in some survivors on natural or manmade disasters, and use their expert assessment of the individual families showcased on the series. This ‘expert’ testimony on the part of actual survivors would lend some credibility to what this steadily growing movement is trying to portray.

Twitter verse is complete in its participation of preparedness by way of #Preppertalk. This is where you can meet those actively participating in a sense of self responsibility. Join simple folks, authors, sometimes celebrities, rich people, young people, old people, atheists, Christians, pagans, Democrats, Republicans, Australians, Brits, Canadians, the list is too extensive to cover. Political and religious squabbles are discouraged, as the message of the day is all preparedness, all the time. Purchasing deals are shared, recipes, internet links, and maybe best of all: blogs from those who all share the desire to inform and educate. Prepping on a budget, make your own laundry soap, who has the best freeze dried food, paying off debt, living off grid, growing and preparing your own fresh food, what sort of dog works best for home protection, demystifying firearms ownership, solar power. All are joined in a singular thought: that there may be events on the horizon, but we will make the best of it all and continue to live each day to the fullest, with or without electricity. We are frugal, we are smart, we prepare not out of paranoia, but the desire to protect ourselves and our loved ones from those who do not.

Preparedness is a simple concept, really. Not preparing due to the idea that was often put forth last night among #Preppers participants that “preparing for the unknown is a waste of time.” Eating healthier and not ascribing to the commercialist concept that all buying must take place in a sterile, corporate, uncaring big box store has nothing to do with “unknowns.” It is unfortunate that so many individuals have their heads stuck in the proverbial sand. Our list of unknowns is as follows, but of course, is not all inclusive:

Flooding (such as Hurricane Katrina events)

What continues to frustrate us ‘preppers’ is this list of “unknowns” which are currently “knowns” that are actually occurring in the world. In other words, preppers seem to take world events into consideration in terms of preparedness instead of just dismissing them, as many non preppers do. As of this writing, we are awaiting an X class flare from the sun to reach the Earth. “R3” radio interference is expected this evening. What the sun will do tomorrow is certainly unknown, but what we do know is the there are classifications for sun flares (which mean someone behind a desk is expecting them at some point in our future.) Iran continually threatens to disrupt oil movement in the Middle East which results in increased gas prices. Increased gas prices impact pricing at the grocery store as well as many other parts of our existence. Inflation results in less product for your buying dollar. Earthquakes have plagued unusual parts of the US this year as well as devastating Japan which plays a significant role in the global economy.

There was another tweet that has plagued me since I read it last evening. It is the thought that we should be prepared spiritually and in our hearts, and that we should rely only on God. It’s not the idea of depending on God that I rail against; it’s what missing from the equation: that many who do believe in a higher power seem to forget that the sentient being on high will bring certain people together for a reason. That is, if you believe this is all part of a plan and you are a willing or unwilling participant in your own life.

Being part of some “big plan” because of some great chess game being played in the sky means that there are pieces on the chess board that sooner or later, you will be neighbors with, or married to, or the parent of. Being a part of a plan means that we will come together at some point in the spirit of connectivity, preppers and non preppers alike. Your connectivity may be limited to your television screen or I-pod. But you witness people making themselves ready for whatever may come. Do not be disheartened or disgusted by what you see. Be inspired. Be inquisitive. Many (not all) of those engaged in the art of preparedness often do so with charitable thoughts of others factored into their decisions.  Preston White with his many seeds comes to mind. You may have friends or family who engage in readiness and you will be completely unaware, or you denigrate them for questioning an uncertain destiny. People may come into your life, possibly part of some ‘big plan’ that are brought there by that destiny; you are supposed to meet these individuals, either in person, or by way of your television or I-pod. Embrace them however you meet them, be it on your wide screen or in person. They just may end up passing through your life as part of one really immense conclusion.

You can read our preview of the March 6th Doomsday Preppers episode at http://radicalsurvivalism.com/web/2012/03/05/doomsday-preppers-sneak-preview-nine-meals-away-from-anarchy/